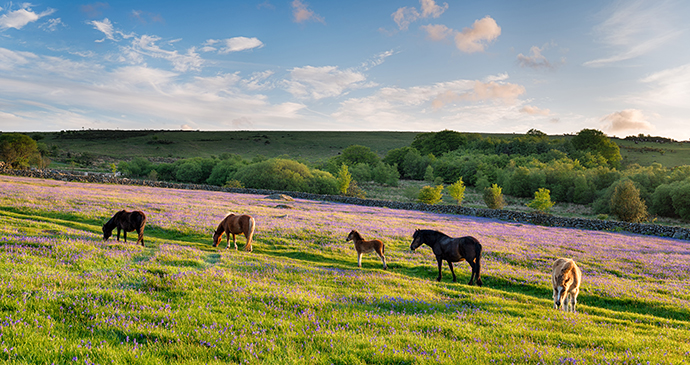 England’s last wilderness, and the feeling of space and silence, broken only by the trilling of skylarks and the scrunching of boots on stones, is intoxicating.

Look at any map of Devon and you’ll see the largely roadless blob that is Dartmoor. Literature and imagination give it an air of menace: The Hound of the Baskervilles, a bleak prison where the surrounding moor is the best security, and craggy tors emerging from heavy, disorientating mists. This national park is high – the highest land in England south of the Pennines – leaving the visitor exposed to raw winds sweeping in from the Atlantic. But there’s a softer side to Dartmoor: sheltered, wooded valleys which feel a world away from the typical moor. So if you want Dartmoor bleakness you can find it. Once you cross a cattle grid the hedges disappear, sheep and ponies raise their heads to watch you pass, and the wind catches your hair as you reach for a sweater. You can walk for hours without seeing a road – or a tree. And everywhere you see granite: rocks as large as cars scattered randomly or piled on top of hills to form the tors that define Dartmoor, quarried and dressed in the walls of the ancient village churches, or rough-hewn and arranged in circles or rows by the first humans to make the moor their home. 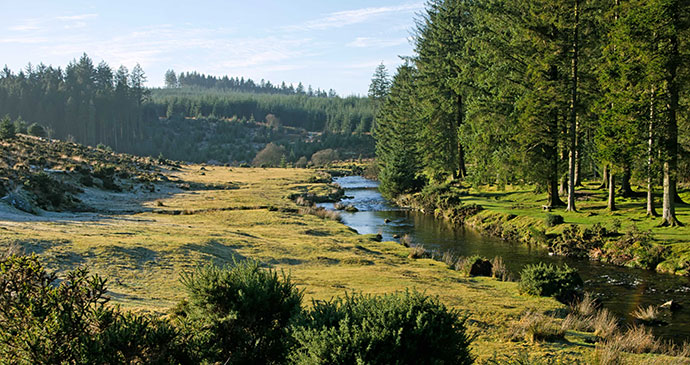 The low-lying perimeter is another world, however, networked by deep narrow lanes. Footpaths meander through gentle, flower-filled meadows or dark woodland, or along the banks of rivers. The Tavy, Teign and Dart dominate, but all have tributaries and you are never far from a brook. Hidden in the valleys are small villages, their church towers poking through the trees, and welcoming pubs. But no one visiting here would stay only in the valleys; Dartmoor is the high moor. You may regret venturing up there in mist and rain, but on a sunny day its wildness is alluring. It’s aptly called England’s last wilderness, and the feeling of space and silence, broken only by the trilling of skylarks and the scrunching of boots on stones, is intoxicating. 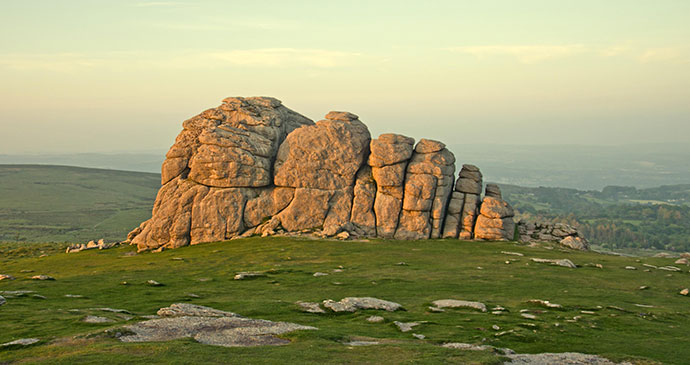 Four miles west of Bovey Tracey, Haytor is the best-known of all of Dartmoor’s tors © Unique Devon Tours

Dartmoor also has, uniquely, its visible prehistory in the monuments such as hut circles and stone rows that litter the moor. A newcomer might assume the tors are also the work of prehistoric people. The word comes from the Celtic twr, or tower, but these are the work of nature – erosion – not of man. And in an area that has blessedly few ‘tourist attractions’ nature has provided children with some rewarding scrambles and adults with hills to test their stamina, as well as giving Dartmoor its unmistakable horizon.

For information about Dartmoor, see www.visitdartmoor.co.uk.