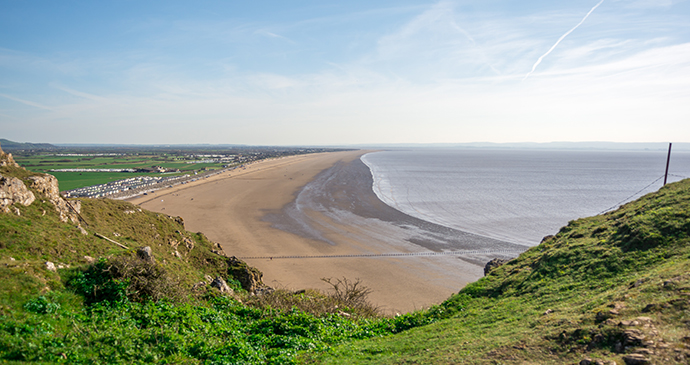 The views are of course sensational: south Wales, Exmoor, the Quantocks, the Mendips and the Somerset Levels – and directly in front of you, Steep Holm, which is about as close as you are going to get to the island without actually being on it.

A towering, blade-shaped peninsula nosing out into the Bristol Channel, Brean Down is essentially the last remnant of the Mendip Hills escarpment. A Site of Special Scientific Interest (SSSI) and now owned by the National Trust, the walk up to and around the headland, which rises to a height of 318ft, should take no more than 90 minutes, notwithstanding time spent admiring the views, and perhaps a stop for a picnic lunch; either way, this is one exhilarating jaunt. Beginning at the Brean Down Café, head up the steep set of steps to the top of the down. Here, take the path to the left, which shadows the southern slopes and continue across the clifftop meadow, brushed with hawthorn trees and, in summer, clumps of purple heather over which butterflies skim and dart. There’s abundant wildlife up here, and you’ll likely spot stonechats and skylarks, and maybe the occasional peregrine falcon – keep an eye out too for the rare white rock rose flower, which is partial to the thin limestone soil prevalent here and is usually present between May and July.

The peninsula culminates in the substantial ruins of a Victorian fort, one of a series of so-called Palmerston Forts constructed throughout coastal areas in the 1860s (and named after the prime minister at the time) to counter the threat of French invasion, though in the event this one never saw action. It did, though, serve as an artillery battery during World War II, then later as a testing site for rockets. Widely dispersed across the tip of Brean Down, the many structures that comprise the fort include the old barracks, officer’s mess, magazine and observation post, and the rusting supports of two massive gun emplacements.

The views are of course sensational: south Wales, Exmoor, the Quantocks, the Mendips and the Somerset Levels – and directly in front of you, Steep Holm, which is about as close as you are going to get to the island without actually being on it. From the fort, you can return the way you came, or you can head back along the other (northern) path, following it around to the right before arriving back at the steps. Note that, although dogs are permitted up here, they must be kept under close control (preferably on a lead), lest your pooch decides to venture seawards.