As is the case further north, traditional limestone farmsteads, hamlets and villages are tucked into the folds of the land and are linked by quiet single-track lanes that rise and dip across the limestone.

From Monyash west of Bakewell to Dovedale north of Ashbourne, the White Peak, though similar in character to its northern counterpart, has a gentler, more pastoral feel to it. This landscape of flower-rich meadow and mixed woodland is criss-crossed with public footpaths too, offering easy rambling alongside burbling rivers and over undulating uplands, with just the occasional sharp climb out of the dales to test your mettle. As is the case further north, traditional limestone farmsteads, hamlets and villages are tucked into the folds of the land and are linked by quiet single-track lanes that rise and dip across the limestone. These riverside and upland settlements of duck ponds, greens, historical inns and tea rooms (some of these settlements retaining traditional butchers, greengrocers and grocery stores) are wonderful places to potter. 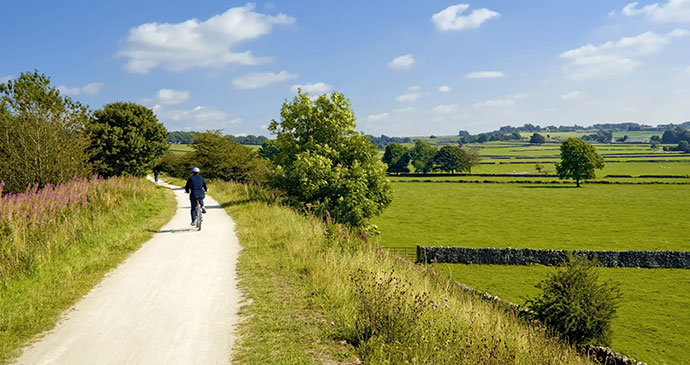 The Tissington Trail – one of three superb cycle routes in this region © David Hughes, Shutterstock

Above and below the surface of the southern White Peak is a landscape rich in geology, history and archaeology. Scattering these uplands are Neolithic and Bronze Age burial mounds and stone circles, the remains of ridge and furrow fields, and the hummocky meadows of lead works dating back to Roman times and beyond. In more recent times, quarries have shaped and reshaped the edges of the White Peak outside the national park, scarring the landscape before returning it to nature. Much of that industrialisation  has disappeared along with the railway tracks, and in their place are leisure trails that wind through areas of outstanding beauty. Within a few miles of each other, there are three superb cycle and horseriding trails worth crossing the country for: the Tissington Trail, the High Peak Trail and the Manifold Track.

On the southern reaches, just outside the park is Ashbourne, a particularly engaging market town that makes an excellent base for an exploration of this area.