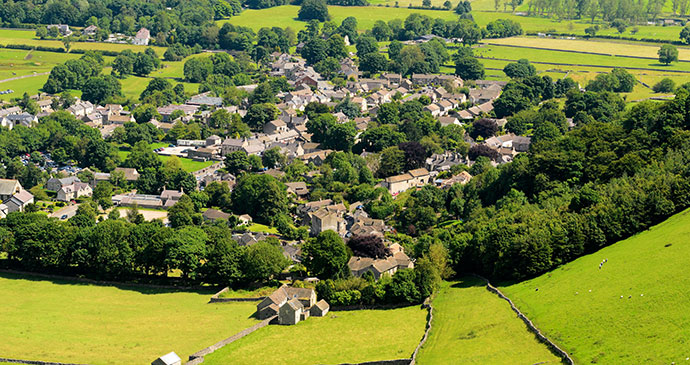 These dales, flanked by walls of grassland and rocky escarpments, are largely uninhabited by humans, but are rich in wildlife.

Limestone is smothered beneath gritstone on the Dark and White Peak boundary, and great caverns lie hidden beneath the rock near the town of Castleton, inviting exploration. From here gritstone gives way to the limestone plateaus that sweep south and eastward in this part of the northern White Peak, a landscape chequered with dry stone walls and criss-crossed with public rights of way and old packhorse trails. Between the uplands there are deep incisions, as if some giant had taken a knife and slashed the surface of the earth. These dales, flanked by walls of grassland and rocky escarpments, are largely uninhabited by humans, but are rich in wildlife. A few bear the stamp of man, lined with watermills and workers’ cottages. Above the dales, attractive villages of stone buildings huddle together in the patchwork of fields, or isolated farmsteads sit caught in the dips of the undulating landscape. This area is encircled by roads and settlements that cut through the wider valleys or sit on the plateaus: Bradwell and Great Hucklow to the east; Tideswell, Litton, Eyam and Stoney Middleton straddling the A623.

The isolated communities are brought together by the lively market town of Bakewell to the south and the elegant spa of Buxton to the west, linked by the A6. Connecting the towns and villages is a vast network of pathways offering walks of great diversity and beauty. The northern White Peak is a wonderful place to explore on foot.