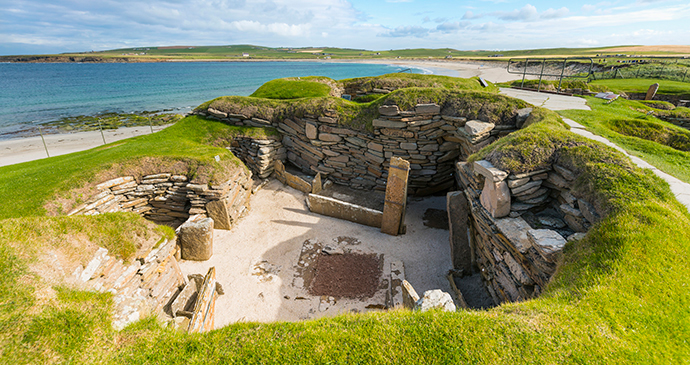 Britain’s earliest known Neolithic village dates back more than 5,000 years and is the most extensive and well-preserved of its kind in Orkney.

Many much-heralded sites can be a let down when you finally visit them: not so Skara Brae, which is managed by Historic Environment Scotland. Britain’s earliest known Neolithic village, dating back more than 5,000 years, Skara Brae is simply haunting. A visit comprises a walk through an excellent interpretation centre, a reconstruction of one of the Neolithic houses, and a short stroll to the village itself, perched hard above the magnificent setting of the Bay o’ Skaill, with headlands pulling away to the north and south.

Occupied from 3100–2500BC, Skara Brae predates the Pyramids of Giza by 600 years and Stonehenge by 1,000 years. The site re-emerged during a storm in 1850, some 4,400 years after it had been abandoned. What you see today represents two distinct phases of occupation. Houses 6, 9 and 10 probably date to the earliest community, around 3500BC, which survived for a few hundred years. The site was then abandoned for several hundred years before being occupied again from 2900–2500BC.

In all, there are eight houses of similar design, with a single room entered from a roofed passageway that, like a street, linked each dwelling. Each house had the same internal layout, with stone beds to the side, a central hearth and a dresser opposite the entrance. While this uniformity brings to mind a modern building development of identikit houses, it also provides a possible insight into the psychology of those who built them and lived there: harmony may well have been essential to the functioning of the village. This sense is reinforced by the fact that no single house is obviously larger or more ostentatious than any other: this was a community where, most likely, people treated each other more or less as equals.

Skara Brae probably supported 50–100 people; each house was most likely home to a single family. The exception is house 8, which is thought to have been a workshop for making stone tools and pottery. The best-preserved and most substantial dwelling is house 1, where you can peer down and examine the central hearth, beds and dressers of stone slabs as well as stone tanks embedded in the sand that were used for preparing fish bait. Occupants used bracken and deer skins to make their ‘furniture’ comfortable. For food, they hunted deer, gathered berries and reared pigs, sheep and cattle. Stone food boxes were lined with clay to act as refrigeration. Whalebone arches were used to secure doors.