The places listed below make ideal bases for exploring the North York Moors. 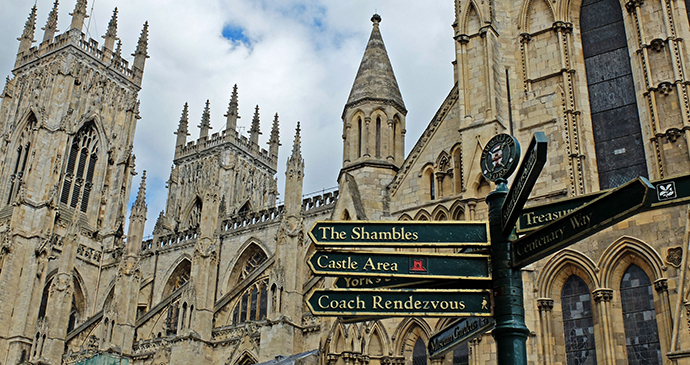 History and culture at every turn. The home base of choice for the Slow urbanite.

Slow market town that specialises in relaxing watersides – along the canal and by the lily ponds of Burnham Hall. The best of the Yorkshire Wolds is right on the doorstep. 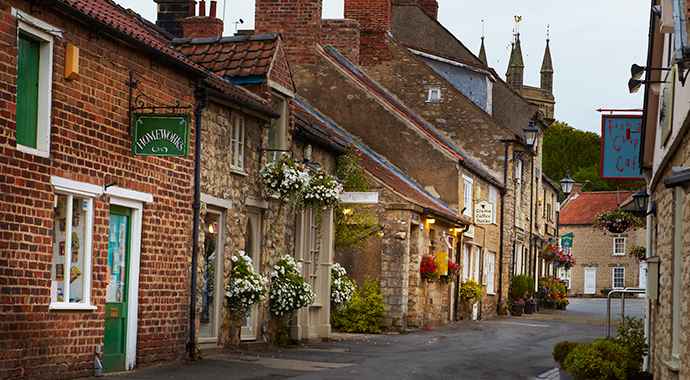 A small, genteel town nestled between the North York Moors and Howardian Hills. Perfectly placed to visit nearby castles, stately homes and abbeys.

A bustling market town 15 minutes by train from York and in the shadow of the Hambleton Hills.

Childhood home of Captain James Cook, with great moorland walking from the doorstep. Linked by a scenic railway to the Esk Valley and Whitby.

Cliffs, beaches and history – a mini York by the sea with easy access to the wilds of the North York Moors National Park.

William the Conqueror’s own personal castle lords it over this friendly market town. The North Yorkshire Moors steam railway links it to the moors and coast and Dalby Forest is just a short cycle ride away.

A peaceful seaside resort with the bright lights of Scarborough 20 minutes away by train – who needs it though when you have the longest beach in North Yorkshire. A stone’s throw from Flamborough Head and the rest of the Yorkshire Wolds.

A proud and traditional riverside market town at the foot of the Wolds and in sight of the North York Moors and Howardian Hills. Good train and bus links to almost everywhere in this book.

The Wolds are on the doorstep of this genteel, quiet and civilized little town but so is the bustling city of Hull (a mere 15 minutes away by train). If you want the history and culture of York but without the crowds then Beverley is for you.

Below is a brief overview and suggestions of how to reach the North York Moors from other parts of the country. 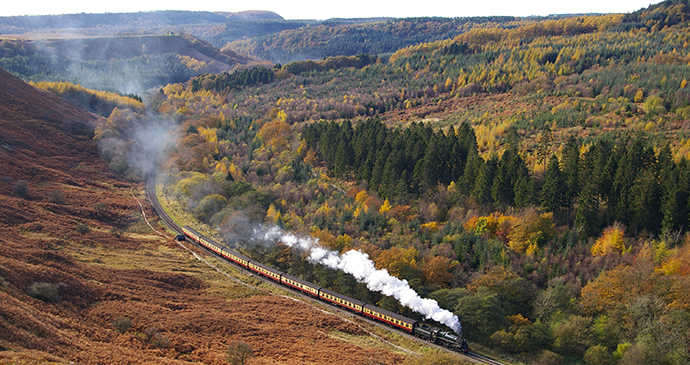 Few people aren’t moved to a wistful nostalgia at the sight of an old locomotive in full steam, and the North Yorkshire Moors Railway is one of the most popular places in the country to enjoy the experience © John Hunt, NYMR

York is the hub of the rail network hereabouts. From York Station, you can travel north on the East Coast Main Line for Thirsk or east on the Trans-Pennine Express to Malton and Scarborough. From Scarborough the Yorkshire Coast Line, visits Filey then skirts the Wolds, with stations at Hunmanby, Bempton, Bridlington, Driffield and Beverley. A circular route can be completed back to York via Hull and Selby. The only other ‘Network’ rail line in the region is the wonderful Esk Valley Line which runs between Middlesbrough and Whitby, calling at Great Ayton. Not counting the miniature North Bay Railway in Scarborough, only one private train line operates in the region and that is the North Yorkshire Moors Railway, running from Pickering to Grosmont. On its 18 mile route it calls at Levisham and Goathland and at peak times a steam service continues along the last six miles of the Esk Valley line to Whitby.

A cheaper (but slower) way of getting here is by the excellent Yorkshire Coastliner bus. This service runs every day from Leeds to York (every 15 minutes) and then on to Malton (every 30 minutes). Here the service splits, with buses travelling to Scarborough (every hour), Whitby via Pickering and Goathland (three times a day) and Filey and Bridlington (three times a day).

Once you have got here, getting around by bus is not quite so simple. As is the way with bus services, the smaller and more isolated the place the poorer the service, especially in the less mainstream tourist venues. Buses around the quieter corners of the Howardian Hills and Wolds are particularly sparse.

The harbour towns of the North Yorkshire coast have no ferries to take you from A to B but lots of opportunities exist for trips out and back in the summer months (weather permitting). Scarborough and Whitby offer the most options. All of Scarborough’s vessels operate out of the harbour. Numerous boats advertise angling trips, usually with a sandwich board on the harbourside; just turn up and take your pick of the most reputable-looking one. Three enterprises offer pleasure cruises, Queensferry Coastal Cruises, Scarborough Pleasure Steamers and the Hispaniola (a mock sailing ship). Details of the 19 sea-angling charter boats that operate from Whitby harbour can be found on https://www.whitbyseaanglers.com or contact Whitby Tourist Office. As for cruises here, the company Whitby Coastal Cruises has three boats of various sizes (and exposures to the elements!) running trips up the coast, out to sea for whale-watching and up the river when the tide is in.

The Bark Endeavour is a scale replica of Captain Cook’s famous sailing ship that also does short sea trips. One of the town’s historic, retired lifeboats, the Mary Ann Hepworth, runs trips of a similar distance to the Endeavour. The two small harbours of Staithes in the north of the region and Flamborough in the south, have one charter boat each – All my Sons in Staithes and Emmerson’s in North Bay at Flamborough. It is also possible to get afloat on inland waterways, of course. River Ouse boat trips are available in York or you could indulge in a gentle chug on the Pocklington canal.