This southeastern corner of the North York Moors is dominated by forest, hundreds of square miles of coniferous plantation. 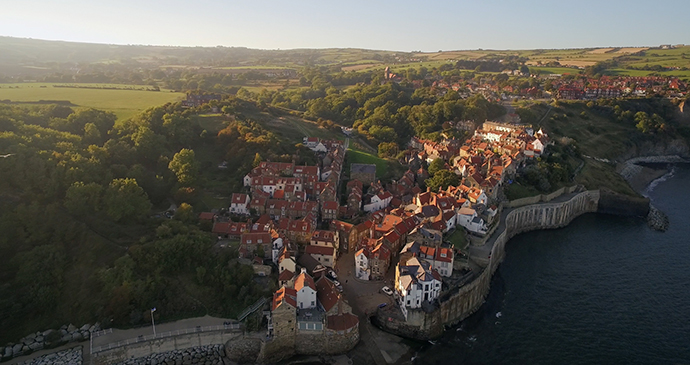 Robin Hood’s Bay has an intriguing history of smuggling but unfortunately no connection to its namesake outlaw © Fringe Productions, NYMNP

This southeastern corner of the North York Moors is dominated by forest, not the natural English oak woodland that was originally here, but hundreds of square miles of coniferous plantation. The almost-linked forests of Cropton, Dalby and Harwood Dale constitute the Forestry Commission’s North Riding Forest Park, at 500 square miles the second largest in England. It stretches from Rosedale in the west to the North Sea coast in the east, across an area of plateaux and deep valleys that some inspired geographer gave the perfect label of the Tabular Hills. These uplands don’t meet the sea gently, but in a line of precipitous cliffs stretching from Robin Hood’s Bay in the north to Filey in the south. In the few places where these cliffs relent, there is sand, and where there are beaches there are holiday resorts. Scarborough, with two sandy bays, is not only the biggest seaside resort on the Yorkshire coast but claims to be the oldest in the world.

Next comes little Cayton Bay, literally awash with surfers much of the time, and finally, seven miles south of Scarborough, her younger and more modest sister, Filey, with the queen of beaches – five miles of glorious Filey sands stretching to the chalk cliffs of Flamborough Head and out of North Yorkshire. The only other town in the region is Pickering, an old fortified market town sitting just at the point where pancake-flat Ryedale turns hilly: very much a southern gateway to the North York Moors.