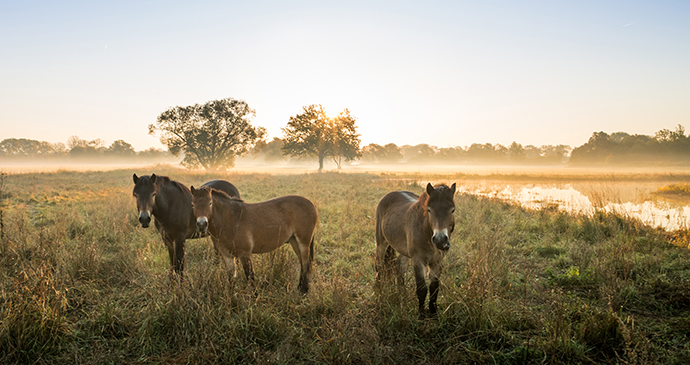 A soft landscape of rounded hills, splashed yellow from gorse and purple in the late summer when the heather blooms, and of deep, wooded valleys.

This is one of England’s smallest national parks, a soft landscape of rounded hills, splashed yellow from gorse and purple in the late summer when the heather blooms, and of deep, wooded valleys. And Exmoor has the coast, adding pebble coves and sea views to its attractions, along with the many rivers that race to the sea from the high ground, slicing into the soft sandstone. With so much of Exmoor managed by the National Trust, clear signposting makes walking or cycling a real pleasure. Astonishingly, for such an utterly delightful region, it’s one of England’s least visited national parks. You may not believe this on a sunny weekend in Lynmouth or Hunter’s Inn when they’re buzzing with visitors, but solitude is not hard to find.

The publication of Lorna Doone in 1869 gave Exmoor tourism a marketing high that persists to this day, with preparations in hand to celebrate its 150th anniversary in 2019. Blackmore’s novel is more identifiably set in a genuine English landscape than most other literary classics, and the number of visitors to Oare church testifies that fiction is as powerful as fact. 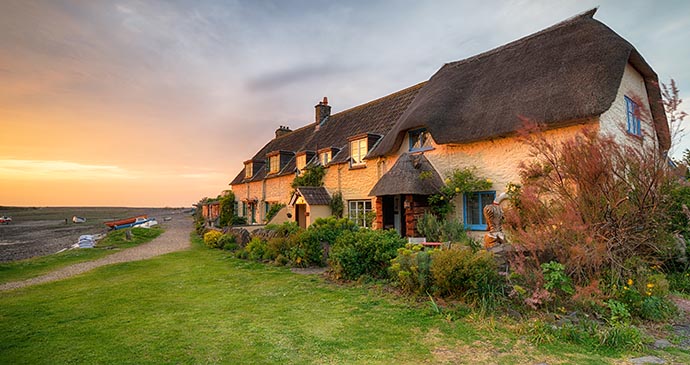 Other Exmoor enthusiasts were the Romantic poets who descended on Exmoor a couple of hundred years ago when Samuel Taylor Coleridge and his pal William Wordsworth tirelessly walked the hills and coast Coleridge lived in Nether Stowey in the Quantocks, with William and Dorothy lodging nearby. In the autumn of 1797 they walked the coastal path to Lynton, and are said to have planned Coleridge’s most famous poem, The Rime of the Ancient Mariner, during that walk, with Watchet being the inspiration for the harbour from where the sailor set out. Coleridge was staying near Culbone when an opium-induced flow of poetry was interrupted by ‘a person from Porlock’. He never finished Kubla Khan. However, his name lives on in the Coleridge Way, which follows his favourite walk.

In 1799 Robert Southey, the then Poet Laureate, lived in Minehead and penned a rather bad sonnet in praise of Porlock, while nine years later Shelley burst in on the tranquillity of Lynmouth, scattering pamphlets and scandal. All in all, anyone who had anything to do with poetry at the turn of the 18th century seems to have ended up on the Exmoor coast.