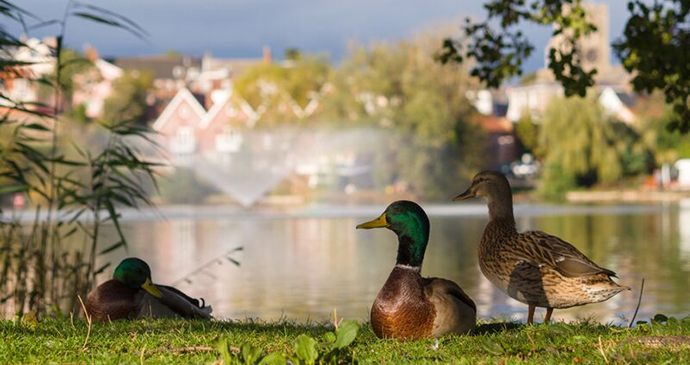 A sense of cosy isolation where south Norfolk eases into the clay country of north Suffolk, where there are fewer big estates, and more commons, ancient hedgerows and moated farmhouses.

Just as the Little Ouse River forms a natural boundary between Norfolk and Suffolk in the west of the region, the River Waveney performs the same function in the centre and east. The Waveney’s source lies between the villages of Redgrave in Suffolk and South Lopham in Norfolk, close to where the Little Ouse also rises. The sources of the two rivers are actually so close that Norfolk is almost an island – a heavy downpour and a flooded road or two and the separation is complete.

From its humble origins in Redgrave Fen, the Waveney flows east through the small towns of Diss (Norfolk), Bungay and Beccles (Suffolk) before looping north around Lowestoft to join the River Yare at Breydon Water and eventually go to sea at Great Yarmouth. East of Bungay, the river lies within the boundary of the Broads Authority and the river is connected to Oulton Broad just west of Lowestoft by a manmade channel, Oulton Dyke.

All this talk of rivers and county boundaries might suggest that the Waveney forms some sort of impenetrable barrier. Far from it: the river is more of a conduit than anything, a far cry from the situation with the Yare to the north where the river represents a real physical obstacle. The Waveney, in contrast, has plenty of bridges spanning it, especially in its western reaches.

The Waveney Valley may not be much of a valley in physical terms – it’s hardly Kashmir – but it does have a personality all of its own that seems quite separate from the rest of Norfolk and Suffolk. Teenagers along the Waveney Valley may display keen allegiances to either Norwich City or Ipswich Town but that is about as far as it goes. The birdsong in the hedgerows sounds pretty much the same on either bank.

So what characterises the Waveney Valley? It’s a sense of cosy isolation, where south Norfolk eases into the clay country of north Suffolk, where there are fewer big estates, and more commons, ancient hedgerows and moated farmhouses; more meandering tracks that seem to follow every field boundary before ending up nowhere in particular.

There has probably been less change over the past half century in this region than anywhere else in southern England. While the attractions of north Norfolk have undoubtedly lured numerous outsiders, downsizers and weekenders over the years, the Waveney Valley has a different kind of draw. Those that have settled here have tended to become more integrated into the existing community. It has long attracted artists, writers and craftsmen and there was a noticeable, if small-scale, invasion of folk escaping the city for something simpler and more wholesome back in the 1970s – they are mostly still here.