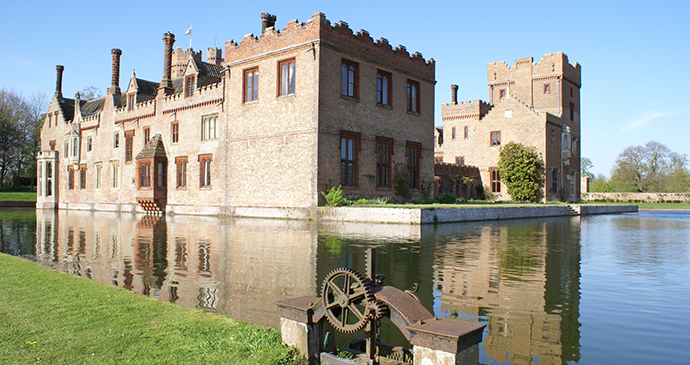 Oxburgh Hall is a popular attraction in the Brecks region © Raedwald, Dreamstime

The Brecks’ distinctive habitat is a prized haven for wildlife: it is home to several species of plant, insect, bird and mammal that are found almost nowhere else in the country.

The Brecks is a region in the western part of Norfolk which lies between Swaffham in the north and Thetford in the south. Both towns have historical interest well beyond what one might expect. Thetford was home to the monarchs of East Anglia and the seat of a bishopric; it was also the birthplace of that staunch anti-monarchist Thomas Paine. Swaffham is an old-fashioned market town with a futuristic and heart-warmingly eco-friendly Green Britain Centre. As a discrete region, the Brecks reaches well into Suffolk across the border. Of the five market towns that belong to the Brecks area – Swaffham, Watton, Thetford, Mildenhall and Brandon, the last two are in Suffolk.

Although the Brecks borders the pancake-flat region of the Fens, it really could not be more different. The Brecks, in contrast to the fertile black soil found in the Fens, has light, sandy soil that is far less ideal for intensive farming. The word ‘breck’ comes from a word that means land that becomes quickly exhausted. It’s the closest thing that Britain has to a desert and this is really not so far-fetched, as the rainfall is the lowest in the country, summer temperatures can be among the highest, and winter frosts the hardest. The sand that covers the chalk was originally wind-blown, but trees have since been planted to stabilise the soil. Back in the days before such enlightened ideas, when large estates sought to maximise their profits by introducing sheep, the sand blew freely around causing untold damage, depleting thin topsoil in one place and covering up fertile land in another. In north Norfolk, sheep may have brought fortune but here they just heralded disaster.

The vast Thetford Forest, flanking the A11 around Thetford itself, is a recent innovation, planted by the Forestry Commission after World War I to provide a strategic reserve of timber. Much of what is not forest goes to make up the Stanford Battle Area, established in 1942, where the Army practise manoeuvres and test ordnance. Vast stands of Scots and Corsican pine may be what most people immediately associate with Breckland these days but it is a very recent trend. Step back just a hundred years in time and you would see only sandy heathland, gorse and rabbits – lots of rabbits.

It almost goes without saying that this is a part of East Anglia that many speed through without stopping. Consequently, it is not as well-known as perhaps it deserves to be. Outside the few towns, the Brecks’ distinctive habitat is a prized haven for wildlife: it is home to several species of plant, insect, bird and mammal that are found almost nowhere else in the country.