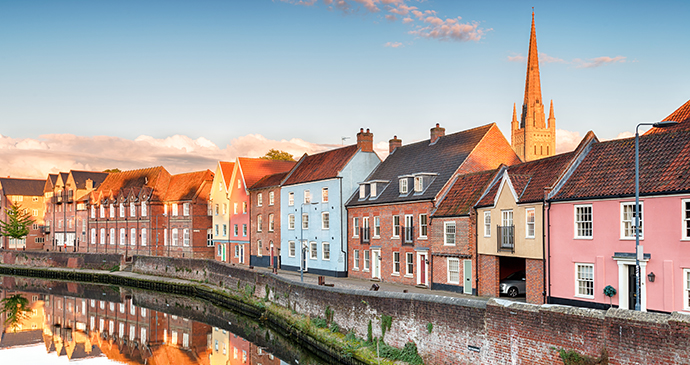 It is probably true to say that Slow philosophy has its heart in the villages and market towns rather than the cities, but Norwich is hardly your average city.

This area comes as something of a catch-all, a means of including parts of east and south Norfolk that don’t conveniently fit in elsewhere. The River Yare that flows from central Norfolk to Great Yarmouth is perhaps an obvious point of focus: a natural conduit for river trade between Norwich and the coast. This same river also connects with the Broads at Breydon Water, and even has a couple of important minor broads of its own at Surlingham and Rockland. If the Yare Valley is a convenient means of incorporating uncooperative slices of east Norfolk, then the valley of the River Tas can be brought in to do the same for south Norfolk. The modest River Tas, which joins the Yare just south of Norwich (having quietly meandered up from south Norfolk), has nothing of the importance of the Yare, but it does link a number of villages that are worth a visit south of Norwich.

It is probably true to say that Slow philosophy has its heart in the villages and market towns rather than the cities, but Norwich is hardly your average city. Despite recent plaudits in ‘Best place to live’ features by some newspapers, the general image is that of a city out on a limb that is out of step with modern times; a place of gauche, unfashionable attitudes and a plucky, if sometimes unpredictable football team; Alan Partridge, Delia Smith, parochialism, mustard, banking and insurance.

Naturally enough, the reality is somewhat different: Alan Partridge is a fictitious character (although there really is a Radio Norwich these days), Delia Smith lives in Suffolk despite her regular outings to Carrow Road to watch football, and Norwich Union have re-branded as Aviva and outsourced to Sheffield and India. Contrary to expectations, the city is increasingly cosmopolitan, has a thriving university and is one of the fastest growing cities in England. Simply put, Norwich punches well above its weight.