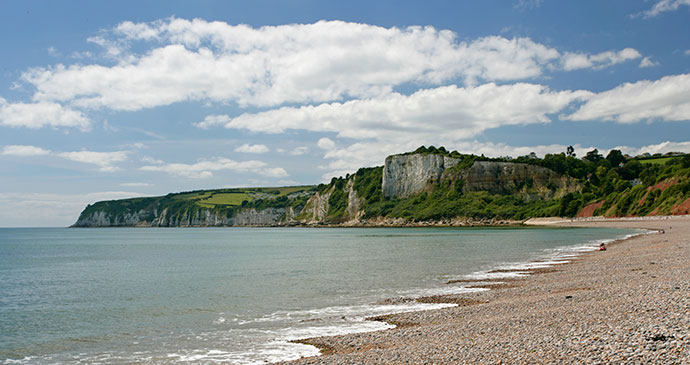 Their beaches are still fringed by small colonies of much-loved, cheerily painted beach huts, where families and retired couples set out their deckchairs and brew up tea on camping stoves

Seaside towns as such started to develop in Heath’s ‘magnificent bays’ in the Regency period; 1750 saw the first record of claims that sea bathing was beneficial, and by the end of that century the familiar attractions of seaside towns were well established. Originally bathing took place in the winter, whether a quick spartan dip in the ocean or in heated sea water. To reap the full benefits, immersion before 10.00 was recommended, as was drinking four quarts of sea water. Then, as that new-fangled monster the railway began to reach the coast, previously sleepy towns saw an increasing influx of visitors and a consequent spread of bathing paraphernalia (tents, machines, attendants …) to preserve their modesty. It’s a very different scene today, although the seaside towns and villages in this chapter have all retained faint echoes of Victorian sedateness. Their beaches are still fringed by small colonies of much-loved, cheerily painted beach huts, where families and retired couples set out their deckchairs and brew up tea on camping stoves; visitors stroll along the promenade admiring the view, or sit, often bravely windswept, on strategically placed wooden benches. Children build castles or patterns out of stones for want of sand (although some stretches are sandy), or play in rock pools, or catch crabs; and seagulls are poised to grab at that last chip or bite of sandwich.

However, a new buzz has been creeping in and around our old traditional seasides, like a high tide creeping up a beach. Watersports have taken hold in a big way, with kayakers and stand-up paddleboarders now enlivening the bays. Today’s visitors show greater interest in the history and culture of the towns they visit, so local museums have improved and the work of local artists and craftspeople has become more visible. Music and literary festivals such as those in Budleigh Salterton and Sidmouth attract high-quality speakers and visitors from far afield. The fiendish cross-country Grizzly race in Seaton has international participants, and the Donkey Sanctuary near Sidmouth receives visitors from every part of the UK and beyond. But alongside the new animation we still have the tranquil and perfectly curved bays along this stretch of coast, the extensive views and fresh, fresh air on the cliffs, and the peaceful lanes and side-roads that link the villages together. Moreover, these same cliffs are a part of UNESCO’s Jurassic Coast with its multi-million-year history; and this exciting heritage is now celebrated in Seaton Jurassic, the brand-new centre opened in early 2016. These Jurassic links and their uniqueness are perhaps the most important reason of all for visiting this very special part of Britain.