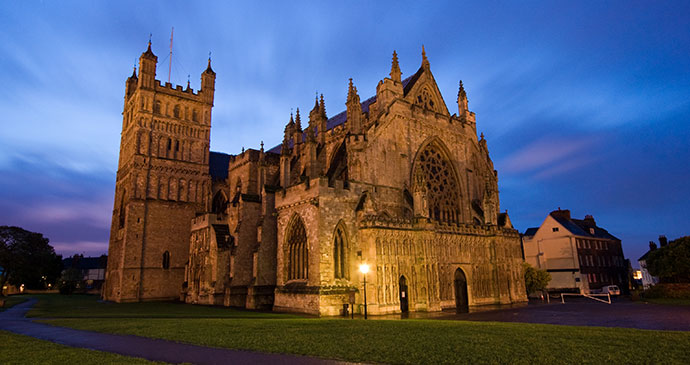 Exeter is in fact surprisingly gentle, with plenty of open spaces and visible history encouraging a moment’s pause and enjoyment.

As cities go, Exeter is surprisingly gentle, with plenty of open spaces and visible history encouraging a moment’s pause and enjoyment. It’s also compact, cupped in green surroundings, without the unappealing urban spread that commonly occurs. There are so many unexpected discoveries: the 10th-century ‘Exeter Book’ of Anglo-Saxon poetry; the breathtaking beauty of the great cathedral’s Gothic arches; the rough texture of the old Roman wall, still as it was when strolled along by sandalled Roman feet; tiny ancient churches; twisting medieval lanes; sudden bursts of art; markets and cafés proudly selling local produce; parks and gardens bright with flowers; a poem inscribed on the pavement – the list goes on.

Of course there are downsides too – the crowds, traffic, ugly post-war rebuilding, a soulless shopping area, some dreary streets – but the balance is definitely positive. Rated in surveys as one of Britain’s happiest cities in which to live, Exeter is well worth exploring. Of course Exeter’s great plus is, as the Rev Stebbing Shaw mentions above, the River Exe; its broad estuary, stretching seaward, attracts a mass of birdlife and an equal mass of Exeter’s inhabitants, enjoying its leisure potential. Watersports in the waterside towns and villages are fast growing in popularity, and the new 26-mile cycle trail along its banks, from Exmouth on one side right round to Dawlish on the other, provides stunning views and some hearty exercise for both cyclists and walkers. And, while Exmouth marks the end of the estuary’s eastern bank, it also marks the start of the geologically fascinating Jurassic Coast, a UNESCO Natural World Heritage Site stretching 95 miles eastward into Dorset.