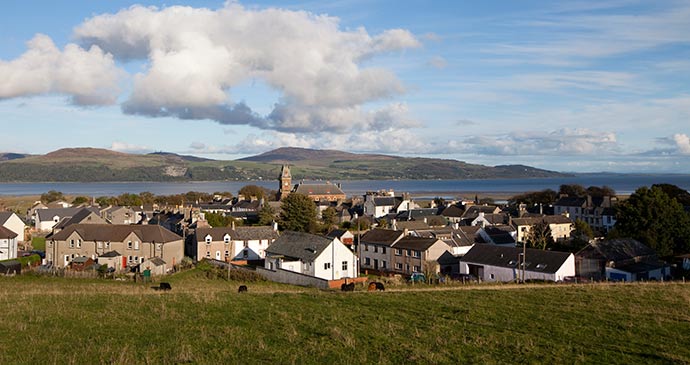 Occupying the tract of land between the high hills and ragged coastline of the Stewartry to the east and the gentler landscapes of the Rhins to the west, the Machars and Moors offer a compelling mix of upland wilderness, undulating interior and idyllic coast for discerning travellers in search of somewhere just a wee bit off the beaten track. North of Newton Stewart stretches empty moorland, while to the south, the peninsula of the Machars – from the old Scots word meaning low-lying coastal plain – is perfect for pootling around quiet lanes by car or bike or venturing into the countryside on foot. Exploring is a real treat with a wealth of attractions and features that are as notable for their diversity as they are for their compact geography: it takes less than an hour to drive the 28 miles from Newton Stewart down to the Isle of Whithorn (though the going is slower if you head north to the moors).

Culture and history abound, notably in Wigtown, Scotland’s National Book Town, and at Whithorn, the cradle of Christianity in Scotland.

Culture and history abound, notably in Wigtown, Scotland’s National Book Town, and at Whithorn, the cradle of Christianity in Scotland. There is also a plethora of prehistoric sites: stone circles, cup and ring marks, Iron Age settlements, crannogs, chambered cairns … historical evidence of life down through the centuries in such abundance that separate books have been written on them alone. We have selected some of the best to include here, but there are lots of leaflets and information points around the region, so if you have a specific interest, keep an eye open for relevant literature. As ever, OS maps provide an indispensable reference source, too.