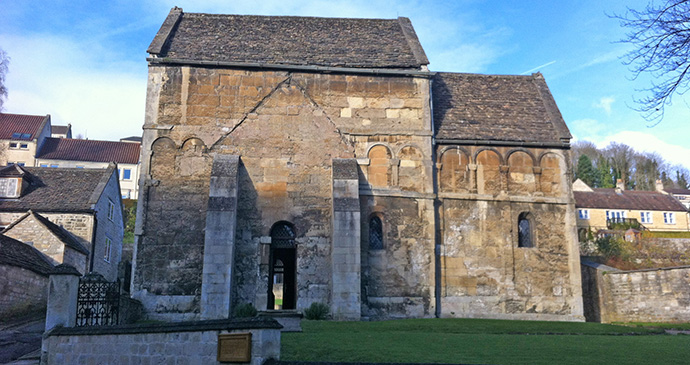 The Saxon church in Bradford-on-Avon © www.visitwiltshire.co.uk

Towns such as Malmesbury, Corsham and Bradford-on-Avon all have their own character and just a day spent in each should leave you feeling that you’d like to spend longer.

For some, Wiltshire is more associated with Salisbury Plain and the Vale of the White Horse than the Cotswolds, but a reasonable chunk of the Cotswolds does fall into the county. Because the area is less known, its quiet, untouristy nature gives quite a sense of discovery.

Towns such as Malmesbury, Corsham and Bradford-on-Avon all have their own character and just a day spent in each should leave you feeling that you’d like to spend longer. But it’s the countryside that is the jewel here, much of it appealingly remote. In the north of this locale, above the M4, the land lends itself to open wolds – Malmesbury sits on top of one of them. But below the M4 corridor the land begins to twist and turn again, providing sharp ridges and secret valleys around the edge of Bath.

One of the best valleys for exploring is By Brook. In the north, close to its source, it is relatively well known and tourist orientated, including Castle Combe, one of the great showpieces of the Cotswolds. But further south it uncovers equally worthwhile villages such as Ford and Slaughterford, with plenty of opportunities for walks off the beaten track.

I’ve sneaked north Somerset and a tiny snippet of Gloucestershire into this locale too, for the ridges of hills know no authoritative boundaries, and secrets such as St Catherine’s, which lies within ten yards of the Wiltshire boundary, are too good to miss by being overly picky about where the dotted line falls.

I met a man who had been stationed at one of the barracks in the area while performing his National Service in the 1950s. He reminded me of the important role that the military has played here over many years – there are still several military bases and operational units in the area. He told how, on a Friday evening, the roads for miles around, in particular the London road (now the A4 between  Bath and Chippenham) out of Bath, were lined with personnel trying to thumb a lift to go home for the weekend.