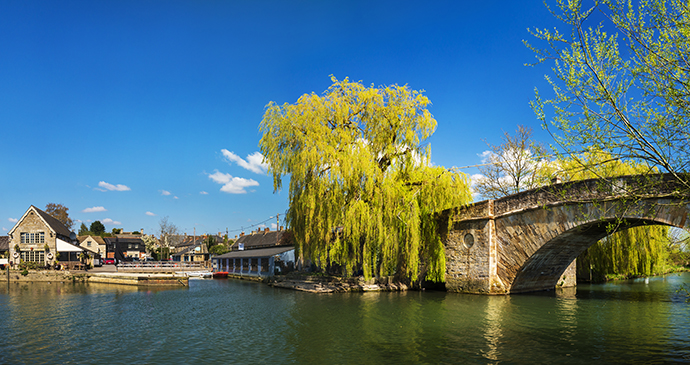 The Thames is a part of the British psyche. From the river’s gentlest of beginnings, it seeps through the village of Ewen before winding through the old gravel pits that more recently have become the Cotswold Water Park.

Where do you immediately think of as the Thames Valley? Reading, Goring, Marlow or Windsor, perhaps? The phrase has been usurped to represent a particular region between Oxford and London for politics, policy and organisation. How about Kemble, Cerney Wick or Inglesham? The true Thames Valley begins in rural Gloucestershire, 53 miles west of Oxford.

It’s hard to imagine the source of the Thames being anywhere other than where it actually is, but the debate over its location has divided opinion for many years and was even discussed in the House of Commons in 1937. Officially, the Thames Head is close to the Fosse Way between the villages of Coates and Kemble, a mile south of Cirencester. It remains dry for most of the year – I’ve never seen it so much as trickle from the ground here in many years – while the source of the River Churn, at Seven Springs southeast of Cheltenham, could actually be the Thames’s true source. It never dries up and, being longer to the confluence than the Thames, should theoretically be the main river.

It would be a brave soul to suggest change either to its route or its name now. The Thames is a part of the British psyche. From the river’s gentlest of beginnings, it seeps through the village of Ewen before winding through the old gravel pits that more recently have become the Cotswold Water Park. It soon gains water and is most definitely a reasonable stream when it reaches the edge of Cricklade, the first town on its journey. From there the river passes through flat open countryside with few villages to get in its way as if with a burning desire to become larger, fuller and more self-confident once the tributaries of the Coln and the Leach add to its stature. By the time it passes through Lechlade-on-Thames, the first town to bear its name, the river is navigable. Small marinas appear and the first of the locks, St John’s Lock, is just east of the town where the reclining figure of Old Father Thames proudly watches over his adolescent child. Both Cricklade and Lechlade are Cotswold gems that often get overlooked by tourists concentrating on the big-name towns.

Within a few miles the river has all but left its Cotswold roots behind, passing through open vales rather than a valley lined with hills. Only when it comes close to Oxford does it show any signs of being a Cotswold river again, passing by suitably Cotswoldesque architecture, but by now the river has grown up, left its youthful home behind and continues its 215-mile journey to the North Sea as an adult responsible for grownup boats and beautifying the grounds of dazzling, upmarket riverside properties. This chapter focuses solely on its youthful beginnings, until just east of Lechlade, when the river passes by the Buscot Estate and Kelmscott Manor, the home of William Morris.