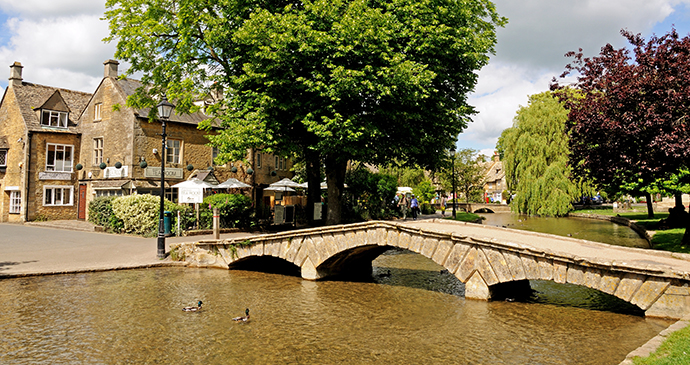 The eponymous water that flows through Bourton-on-the-Water © Caron Badkin, Shutterstock

Some of the most visited villages and towns are here: the Swells, the terrifying-sounding Slaughters and the hyphenated beauties of Stow-on-the-Wold and Bourton-on-the-Water.

There’s a little bit of everything in this area. In the east, the curvy hills remain with interlocking valleys and vistas that make you feel a part of the landscape. Some of the most visited villages and towns are here: the Swells, the terrifying-sounding Slaughters and the hyphenated beauties of Stow-on-the-Wold and Bourton-on-the-Water. I’ve also slipped in some lesser-known jewels that rarely make it onto the tourist trail itinerary, such as Salperton and Longborough, Kineton and Hampnett.

In the north, the town of Winchcombe has established itself as a base for walkers and is proud of its image as a working tourist town without the trappings of being ‘too pretty’.

Further west, you begin to see the more aggressive side to the Cotswold Hills, rugged escarpments that on a windy day make walking on the edge feel somewhat threatening. Places such as Cleeve Common, the highest point in the Cotswolds, and Leckhampton Hill – alternately sublimely calm or alarmingly volatile when a storm approaches and the air is thick with deep mauve thunderclouds.

These hills envelop the spa town of Cheltenham, struggling to cling onto the glory days of its former life as a fashionable health resort yet still retaining that charisma in places.

My heart lies somewhere between them all – the high points in the west and those mellower pastures in the east, striped with flourishing hedgerows and guarded by stone walls, standing defiant whatever the weather throws at them.