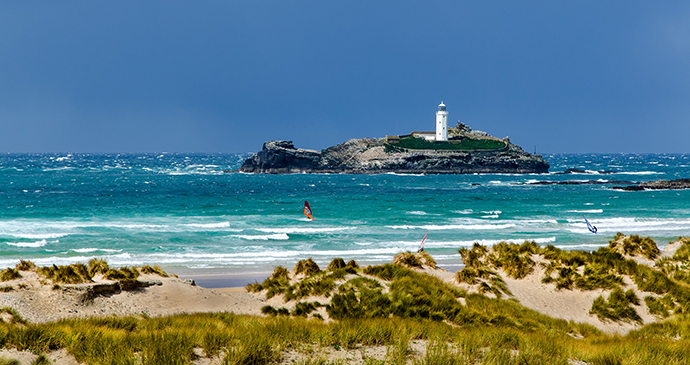 Looking out from Godrevy Head you can spot its lonely island lighthouse © Paul J Martin, Shutterstock

Giant dunes above Hayle and Perran Sands conceal all sorts of treasures, from glowworms and butterflies, to buried explosives works.

Cornwall’s industrial heritage is stamped indelibly on the landscape, towns and coast over the whole county, but with no greater density – and pride – than in the region of St Agnes, Redruth, Camborne and Hayle. This region also covers the Godolphin estate and Tregonning Hill, which form the largest of the ten separate areas which together create the World Heritage Site, established in 2006 in recognition of the importance of the Cornish mining landscape. There’s enormous beauty here, not just in the wild and natural beauty of the north coast dunes and cliffs or the wooded hills and farmland valleys of the interior, but in the decayed industrial architecture, softened by the steady encroachment of nature. You’ll encounter a sense of place that grows on you and intensifies, especially after visiting one of the many museums dedicated to mining heritage, where the colossal human endeavour, which at its peak saw Cornwall meet two-thirds of the world’s demand for tin and copper, is brought vividly to life. You really don’t have to be an industrial archaeologist or have Cornish mining in your blood to appreciate the extraordinary inventiveness that went into extracting the shiny metals from lumpen ore, buried in wet ground, where efficient pumping was crucial to success and safety – nor the tales of courage, comradeship and survival that bound communities together.

The closure of the mines in the last century and the dispersal of the Cornish mining population to new, more profitable areas around the world was reflected grimly in the towns that had once prospered, but times are changing: affordable housing and studio space have brought an influx of artists to Redruth and Camborne, a multi-million-pound development of housing, offices and studios is rising from the wasteland of Pool – and Hayle, with its wave-energy Hub and historic waterfront is poised for a green, Docklands-style revival.

But it’s not all about mining and its aftermath. The north coast is studded with safe, family-oriented beaches, and the giant dunes above Hayle and Perran Sands conceal all sorts of treasures, from glowworms and butterflies, to buried explosives works, churches and sites of pilgrimage; among the dunes of Perran Sands you can lose yourself exploring the lost world of St Piran.