Southeast Cornwall: From the Tamar to the Polperro 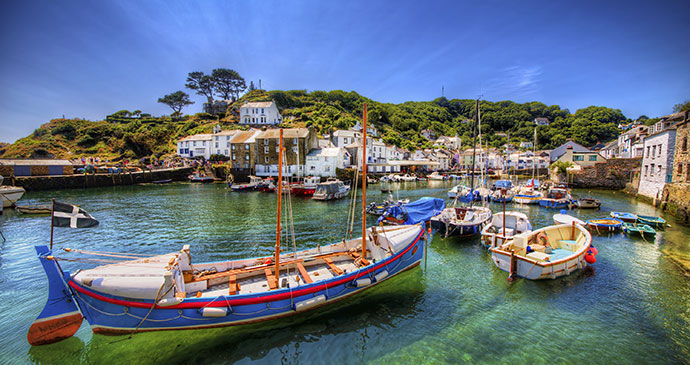 In the south, fishing villages with an almost Mediterranean air about them; to the west are desolate, storm-lashed cliffs.

The bridges that cross the Tamar have a special significance for those whose hearts lie on the western banks – especially for those who regard Cornwall as another country rather than another county. As the historian A L Rowse wrote, ‘The Tamar is a decisive boundary such as no other county possesses – but, then, Cornwall is not an ordinary county…’ I’ve heard of all sorts of odd ritualistic behaviour by travellers on the bridges, but the story I enjoyed most came from a holidaying family where, said the parents, the children breathed out as the car joined the Tamar Bridge on the Devon side and refused to inhale until the Kernow a’gas dynergh (Welcome to Cornwall) sign on the Saltash side had been passed, ‘so the air doesn’t get mixed up’.

I’ve no great fondness for the blink-and-you’ve-missed-it Dunheved Bridge that the A30 rushes over at Launceston, and while I often use the impressively engineered road and rail bridges at Saltash, 20 miles to the south, it’s the three medieval road bridges that lie in between which give the greatest sense of place. The medieval narrowness of Greystones, Horsebridge and Newbridge allow Slow travellers to savour the moment of arrival, to register the exactness of departure. My favourite is the 15th-century Greystones Bridge, three miles southeast of Launceston, so narrow you instinctively breathe in as you cross. Arriving on the Cornish side, a left-hand turn, highly unsuited to heavy vehicles, rises swiftly above river and water meadows and there, on a near-vertical slope is Howard’s Wood, now in the care of the Woodland Trust, with ‘Welcome’ written on the gate. That’s a good start to a county.

Artists and fruit growers have colonised the gentle banks of the Tamar. Despite Rowse’s defiant assertion, I find the boundaries blurred in these parts. The Tamar Valley is its own world, neither especially Cornish nor Devonish, but happy with its own identity. Many on the Cornish side flit across into Tavistock for shopping or eating out; just as further south, many who work in Plymouth commute via the Torpoint ferry to homes on the Rame peninsula. It seems to me that there is less anxiety here than in other parts of rural Cornwall, less edginess; yet also less affluence and security than in the leafy creekside villages of the Helford, Fal and Fowey.

South of the River Lynher, Cornwall’s ‘forgotten corner’ may be linked umbilically to Plymouth, yet in the remote farmland beyond Torpoint, its self-proclaimed obscurity is easy to appreciate. There are grand houses at every strategic estuarine juncture, their gardens lush in the mild maritime climate, and in the south, fishing villages with an almost Mediterranean air about them; to the west are desolate, storm-lashed cliffs, shanty-town chalets and long, empty beaches.

Westwards of Seaton, the Channel coast suddenly assumes its Cornish personality; fishing ports, hidden rocky coves and Neolithic stones bear names that speak an older tongue; this is the start of the Pens and Pols, the Lans and Looes; instead of Johns and Michaels, churches are dedicated to semi-mythical Celtic saints. Inland, where wooded river valleys rise to meet the southern fringe of Bodmin Moor, there are some of the best walking and camping spots to be enjoyed in Cornwall, a wonderfully eccentric museum of music machines, beech trees that are home to Amazonian woolly monkeys and, in Liskeard, the opportunity to discover a handsome market town with an equally engaging identity.