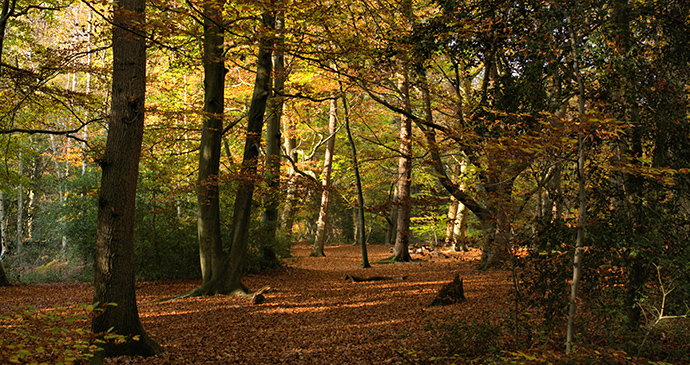 Some of the trees in Burnham Beeches are almost a millennium old © Soulminous, Shutterstock

Some of the woodland, in Burnham Beeches, has probably been the location for filming more famous films and TV series than anywhere else.

The journey continues south, further into the heart of the Chilterns. If you speak to someone who’s lived around these parts for a long time, they’ll probably mention the word ‘bodger’. The word’s modern meaning is a person or people who somehow cobbles a solution together in a faintly amateurish manner. But being a bodger was once something to be proud of: bodgers played a key role in the industry which defined Wycombe and the surrounding area for generations – furniture making. There’s a great deal of creativity in other respects too (and eccentricity) if you take the time to look round. Some of the woodland, in Burnham Beeches, has probably been the location for filming more famous films and TV series than anywhere else; there’s a mayoral ritual which is unique to Wycombe; and the world’s oldest miniature village is cheek by jowl with the creators of Noddy, the Little Red Fox, Father Brown and Discworld in nearby Beaconsfield. One of Britain’s most famous prime ministers, Benjamin Disraeli, connects the two towns, as he lived at Hughenden Manor just outside Wycombe and later took the title Earl Beaconsfield. Other politicians have added to the eccentric pleasures that await discovery by the curious traveller, with the Dashwoods creating the scandalous Hellfire Caves and an Albanian king hiding out with a stash of gold at Parmoor during World War II. Above all, if you visit this part of the Chilterns, you’ll enjoy some quintessential English rural experiences: eating at the oldest alehouse in the country in Forty Green, watching the ducks on Penn’s pond, looking up from the village green in Turville to admire the windmill or hearing the timeless thwack of leather on willow at Wormsley’s cricket ground.