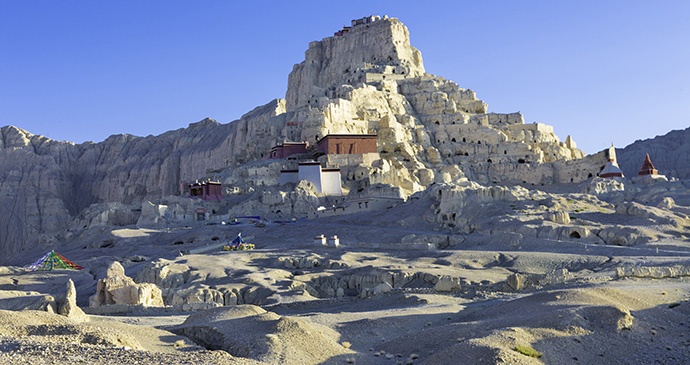 Tsaparang is built tier on tier up a clay ridge © Udompeter, Shutterstock

The Guge Kingdom ruins of Tsaparang are a surreal kingdom of clay set in a stunning desert landscape.

Located 26km west of Zanda (a 1-hour drive) are the extensive ruins of Tsaparang, the once-powerful capital of the 10th-century Guge Kingdom. The main building material is not stone, but clay, with walls, buildings, secret tunnels and escape exits all fashioned from this material. Thousands of people lived here in cave dwellings in this kingdom of clay, which appears to have been operational in the 10th and 11th centuries. Little is known of the history of the Guge Kingdom, but some of the exceptional murals at Tsaparang portray realistic scenes with courtiers and visiting dignitaries, and give some idea of how people lived.

To access temples at Tsaparang, you need the caretaker to open the doors, and you need to pay an entry fee of Y110. The Tibetan caretaker lives in a small house near the main gate: if he’s not at home, he’s probably in the tiny village visible not far away from the ruins. The caretaker may want to see your paperwork, and may insist that no photographs be taken inside the temple structures. Interior photography of the site is a very sensitive point; official permits for photography are complex to obtain (from Beijing), and expensive if you do manage to get them.

Tsaparang is built tier on tier up a clay ridge. The best-preserved parts are the lower ramparts; at the very top are excellent views of the area from the dzong. As you go through the gate into Tsaparang, the first thing you see is the Rust-coloured Chapel, thus designated because its function is not clear – it bears murals of Tsongkhapa, Sakyamuni and Atisha. The White Temple suffered extensive damage to its statuary, but its murals remain intact. Some murals portray Avalokitesvara, the 11-headed, thousand-armed bodhisattva of compassion. The mural style is Kashmiri. The Red Temple was destroyed and left open to water damage, but even so, its murals are striking, with beautiful large Tara frescoes. There are engrossing murals here, apparently depicting scenes from daily life at Guge – in one section envoys are arriving by donkey at the court; another part shows a high lama giving teachings. The Yamantaka Chapel is dedicated to its resident tantric deity Dorje Jigje: the walls bear murals of deities locked in tantric yabyum embraces with their consorts.

From here, wend your way up clay steps, passing through a fantastic winding tunnel to the uppermost ruins. There’s an entire ruined citadel at the top. Once past the tunnel, there is a complex of chambers and passageways: the citadel had its own water supply in times of siege, and the king had an escape route tunnel that led off the rear of the ridge.

At the top, the most impressive structure is Tsaparang Dzong – the king’s simple summer palace – with expansive views over the valley. There are several temple complexes at the top: the most important is the tiny Demchok Mandala Chapel. This chapel is usually locked – if you manage to get in, you can view the remains of a large 3D mandala, which was smashed in the Cultural Revolution. The chapel is a gonkhang (protector temple), and the site of initiation rites. It is thought that in times of crisis, the king and ministers would come to this chapel to ask for protection or direction. The chapel is dedicated to the protector deity Demchok, who is depicted in murals with his consort Dorje Phagmo. Fascinating tantric murals cover the walls: a flashlight is needed to view them. Depicted are rows of dancing dakinis, the female deities who personify the wisdom of enlightenment; below these are gory scenes of disembodiment from hell realms.