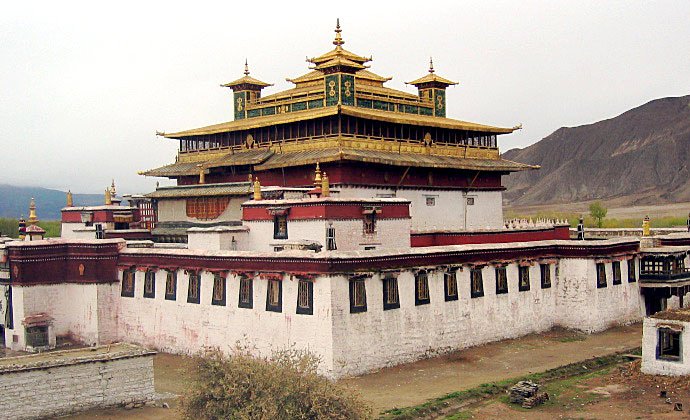 The temple complex has been constructed according to the principles of geomancy, at the centre of which lies a mythical palace on top of Mount Meru.

Samye is thought to be Tibet’s first monastery and its first university. It has been deconstructed and reconstructed a number of times. The monastery is thought to have been founded in the 8th century by King Trisong Detsen, in consultation with Indian sage Padmasambhava. The temple was destroyed during civil war in the 11th century, by fire in the 11th and 17th centuries, by earthquake in the 18th century, and by Mao Zedong’s fanatical hordes in the 20th century. Today, only a fraction of its original 108 buildings survive or have been reconstructed. Adaptations for visitors within the walls include the monastery guesthouse with restaurant and monastery shop. Most Samye villagers live outside the walls.

Samye’s layout is based on Buddhist cosmology: it is a mandalic 3D replica of the Tibetan Buddhist universe. The temple complex has been constructed according to the principles of geomancy, a concept derived from India. At the centre of the Tibetan Buddhist universe lies a mythical palace on top of Mount Meru, which at Samye is symbolised by the main temple (Utse). Surrounding this is a great ‘ocean’, with four great island-continents, and eight subcontinents. If the colour-coded chortens look a bit out of place in this scheme of things; it’s because they were razed during the Cultural Revolution, and were only reconstructed in the early 1990s, in new brick, with synthetic paints, and without much finesse. Renovation and reconstruction of other parts within the walls is ongoing.

The complex is bounded by an oval wall (the original wall was a zigzag design), pierced by four gates and topped by 1,008 small chortens that represent Chakravala, a ring of mountains that surrounds the universe. The wall itself has been hastily restored, using a large amount of concrete – the favourite material of the Chinese.

There are currently about a hundred monks attached to the main temple. The monastery was built long before the rise of the different sects in Tibet. In the late 8th century, Trisong Detsen presided over a debate at Samye between Indian Buddhists and Chinese Zen Buddhists concerning which type of Buddhism should prevail in Tibet. The Indians won. Since that time, the monastery has come under the influence of various sects, such as the Nyingma, Sakya and Geluk traditions. Even today, influences are eclectic.