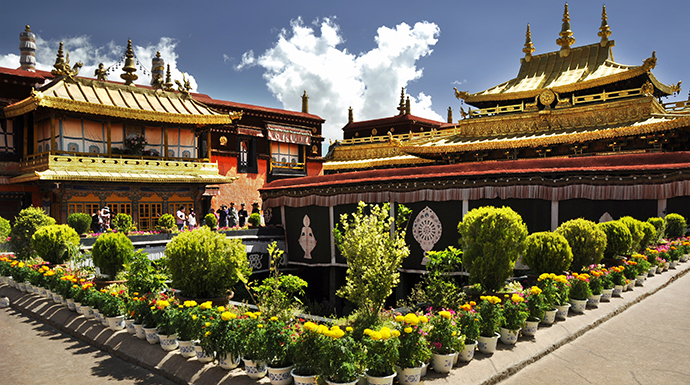 The Jokhang is Tibet’s most sacred temple – the heart of Tibet – built in the 7th century by King Songtsen Gampo.

The Lhasa area is home to not one but two UNESCO World Heritage Sites: the temple of Jokhang and the palace of Potala.

The Jokhang or Tsug Lakhang (central cathedral) is Tibet’s most sacred temple – the heart of Tibet – with streams of pilgrims coursing through. The temple was built in the 7th century by King Songtsen Gampo when he moved his capital to Lhasa. Apart from his three Tibetan wives, the powerful Songtsen Gampo had two wives offered by neighbouring nations – Nepalese queen Tritsun and Chinese Princess Wencheng. The Jokhang was originally designed by Nepalese craftsmen to house a Buddha image brought by the Nepalese queen. Upon Songtsen Gampo’s death, Princess Wencheng switched the statue she had brought (the Jowo Sakyamuni) from the Ramoche Temple to the Jokhang, apparently to hide it from Chinese troops. That’s why one part of the Jokhang (Chapel 13) is called the ‘Chapel where the Jowo was hidden’. In time, the Jowo Sakyamuni statue became the chief object of veneration. The Jokhang was enlarged and embellished by subsequent rulers and Dalai Lamas. Although the building is as old as Lhasa, much of the statuary is quite new. During the Cultural Revolution, the temple was used as a military barracks and a slaughterhouse; later it was used as a hotel for Chinese officials. Much of the statuary was lost, destroyed or damaged, so it has been replaced with newer copies of the originals.

In 2000, the Jokhang was inscribed on the UNESCO World Heritage list as an addition to the Potala Palace (below). Initially, this was greeted as good news, as it implied protection of the buildings in the immediate vicinity. However, ancient buildings around the Barkor have since been knocked down and replaced with Chinese copies, on the dubious grounds of superior plumbing and facilities. Then in early 2018, disaster struck: on the second day of Losar, a huge fire broke out in the rooftop area of the Jokhang, causing considerable damage from fire and water.

The Potala was inscribed on the UNESCO World Heritage list in 1994. The citation says: ‘The Potala, winter palace of the Dalai Lama since the 7th century ad, symbolises Tibetan Buddhism and its central role in the traditional administration of Tibet.’ Chinese authorities conducted a five-year multimilliondollar restoration of the Potala, completing work in 1995. Why restore a palace that is the former abode of Public Enemy Number One? Because it’s a major tourist attraction, of course – and one that generates millions of dollars in income annually. Unlike the Jokhang or the monasteries around Lhasa, the Potala is run by Chinese tourist authorities: the practice of Buddhism is essentially banned in the palace. 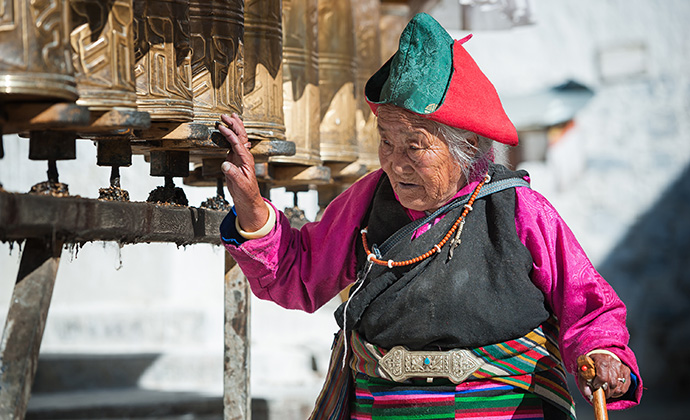 Once humming with spiritual activity, the Potala is now a lifeless museum, a haunted castle. A lot of the Chinese restoration was directed at the enclosing walls, which were damaged by Chinese shelling during the 1959 uprising. Adding considerably to the bill is the ‘wiring’ of the Potala. Electrical hook-ups have been enhanced and video surveillance cameras have been installed throughout. The cameras are to monitor the 60-odd caretakers at the Potala, who pad around in purple trench coats. On a more practical note, fire extinguishers and other devices have been installed (following a disastrous fire that broke out in 1984 due to a short circuit).

Below the Potala, within the enclosing walls, used to lie the Tibetan administrative quarter of Shol. Some buildings in this zone have been destroyed. One building has been turned into a hotel; the others are used as art galleries, souvenir shops, or occupied as residences. Before 1950, Shol quartered the offices of the Tibetan government, Tibetan Army officials, guard offices and a prison. Other sections of the Potala were used to house Namgyal Monastery, as well as a community of monks and a school for monk officials.