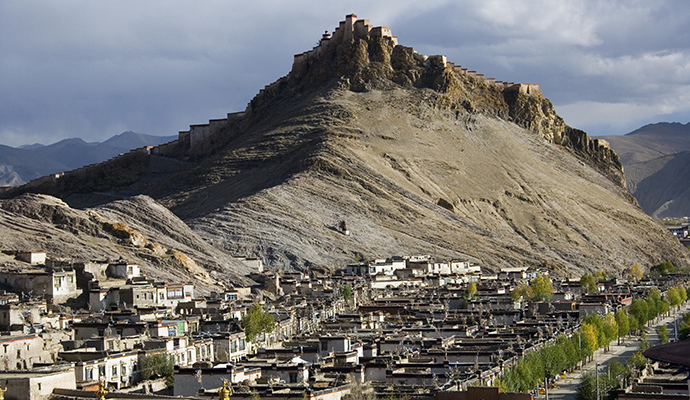 Gyantse is sandwiched between a huge fort and a monastery © Steve Allen, Dreamstime

Gyantse is home to some fantastic fortress architecture and a rare circular temple.

Gyantse was established as the personal fiefdom of King Pelden Sangpo, in the 14th century. His successor, Rabten Kunsang Phapa (1389–1442), extended the fiefdom’s range, and constructed Palkor Choide Lamasery and the mighty Kumbum, both of which are still standing today.

In later centuries, Gyantse developed as an important centre of the wool trade in Tibet, and a bustling caravan stop on the trade route from Lhasa to India. That route – leading to Sikkim and Bhutan – was closed by the Chinese after they took over in 1950. Gyantse has since fallen into obscurity, its role usurped by Lhasa under the Chinese. This situation, however, has left Gyantse intact as a Tibetan architectural entity, which is something quite rare amid all the Chinese destruction and reconstruction. Gyantse has a largely Tibetan population – perhaps around 20,000. There is a huge fort at one end of town, walled-in monastery grounds at the other end, and a ramshackle marketplace with older buildings and alleyways between fort and monastery.

In the late 1940s, Italian photographer Francesco Mele passed through Gyantse. Here’s his description of the market:

Its market is rich, due to the wool trade and the Indian and Chinese imported objects sold there. The shops are near to the main street, and many of them are simply tents. Here women wearing silver and turquoise jewellery sell clothing and household articles … There are even some Nepalese and Bhutanese salesmen, and a few Muslims who have taken the few weeks’ journey from Ladak in order to sell their products in Gyantse. Muslims are often employed as butchers of yak and goat here, since the Buddhist religion forbids Tibetans to kill animals. Fresh and dried beef and mutton hang in every part of the market, giving it an oddly surrealist appearance.

Gyantse market appears to have died: there isn’t a whole lot happening around the old quarter any more. Instead, various smaller street markets are scattered around the town. Nevertheless, Gyantse is a great place to visit, and will give some idea of what an intact Tibetan town must have looked like.

Buildings in Gyantse date back as far as the 14th century. One of these is the massive dzong (fort), occupying a strategic hilltop at the southern end of town. The dzong guarded the road to Lhasa, and the invading British expedition of 1903 found it a formidable obstacle. The British eventually stormed the dzong, the Tibetan defenders capitulated, and there was no further resistance on the road to Lhasa.

Although the last of the British forces withdrew in 1908, several vestiges of British presence remained in Gyantse, in the form of a British Trade Agent, a British wool-agent station, a British post office (with a telegraph line running to India), and later a British-run school for upper-crust Tibetan children. By the 1940s, a great deal of Gyantse’s sheep wool production was slated for export to British India. There was little interest in yak wool, which was too harsh in quality, although in the pre-synthetic era the beards worn by Santa Clauses in US department stores were made from yak-tail hair. Gyantse became a funnel for the export of wool due to its location, and wool was brought here from outlying areas of Tibet.

The 1950s saw a period of severe dislocation in Gyantse. In 1954, the town was nearly destroyed by flooding; in 1959 the local industries were virtually dismantled with the exodus of artisans from Tibet and the removal of others to work camps. After putting down the 1959 revolt, the Chinese imprisoned 400 monks and laymen at the monastery of Gyantse. During the Cultural Revolution, the monastery itself was ransacked and dismantled – items of value were either destroyed or shipped back to China. Gyantse Kumbum, however, was spared. Since 1980, the Chinese have attempted to stimulate the handicraft production for which Gyantse was so famous. But if there has been any stimulation, there is little evidence of it in Gyantse’s present-day marketplace.

In the late 1990s, Chinese authorities embarked on a propaganda blitz in Gyantse, naming it ‘Heroic City’ in praise of valiant Tibetan resistance to British troops in 1904. In Chinese terms, the logic runs thus: ‘Tibetan patriotic soldiers safeguarded state sovereignty and territorial integrity – defending the Tibet–China Motherland.’ These propaganda efforts were most likely tied in with a round of Brit-bashing after the 1997 handover of Hong Kong. First there was the 1997 release of Red River Valley, a Shanghai-made epic movie about the British in Tibet, with on-location filming at Gyantse. This was followed by renaming the main street of Gyantse ‘Hero Street’, and the erection of a huge obelisk as a monument to heroic Tibetan fighters. The monument makes a convenient navigation landmark, right near the town’s central roundabout.