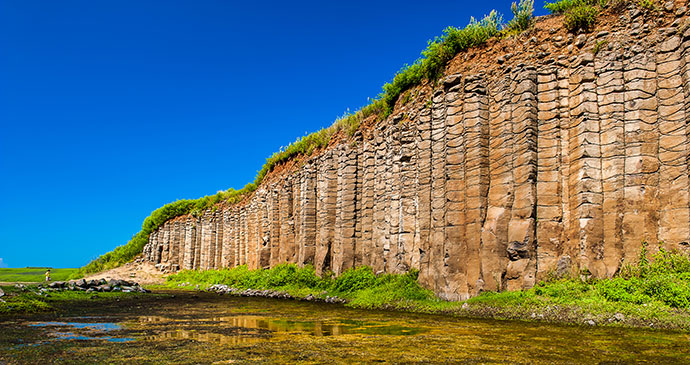 These basalt columns are relics of the Penghu Islands’ emergence from the sea due to volcanic activity © HTU, Shutterstock

Look for nesting green turtles on the windswept beaches of the Penghu Islands.

Located on the Tropic of Cancer some 45km west of Taiwan, all but one of Penghu County’s 90 islands emerged from the sea as a result of volcanic activity. When the basaltic lava pouring from the ocean bed between eight and 17 million years ago cooled, it formed the hexagonal columns that give the archipelago’s cliffs and tablelands a special appearance.

Han people began settling the islands nearly 1,000 years ago, but Penghu didn’t become part of the Chinese empire until a Yuan Dynasty official was sent to administer them in 1281. The population grew very slowly because life was harsh; farming was difficult and pirate raids were so frequent that in 1372 the imperial authorities commanded the inhabitants to return to the Chinese mainland. Not everyone left, it seems – in 1404 visiting officials ordered another evacuation, but again many stayed on. Dutch vessels visited in 1604 and in 1622 the VOC began building a fort. Two years later, however, the Chinese emperor ordered them to leave – and sent so many ships and soldiers the Dutch had no choice but to go. Because they couldn’t set up a permanent base on Penghu, they landed at what’s now Tainan. The Dutch weren’t the first Westerners to set eyes on Penghu – during the 16th century, Portuguese sailors heading for Japan came here and named the islands Pescadores, meaning ‘fishermen’. Seafood has always been a staple because the climate is too dry and the soil too sandy for many crops; you’ll see no rice fields. Also, farmers have to surround their vegetable patches with high walls to keep out the strong, salt-bearing winds. Along with beaches and ancient, abandoned houses, these windbreaks – usually piled-up chunks of basalt – are one of Penghu’s distinctive and recurring sights. During the Japanese colonial era, one of the archipelago’s few non-fish exports was lime, produced by firing a mixture of sand, coral and sea shells. More recently, the central and local governments have been saying that casinos would give the islands’ economy a big boost, but when a referendum was held in 2009, county residents rejected the proposal. Many folk worried that gambling would bring crime and other social problems, and it’s been argued that the islands simply don’t have enough fresh water to cope with a surge in visitor numbers.

Over time, Penghu’s population (currently 99,000) has been shifting away from the remoter villages and islands and towards Magong, the county’s administrative centre and a city rich in historical flavour. If you arrive by plane, you’ll notice the county is pretty flat; the highest point on the main island (also called Penghu) is 48m above sea level. The islands used to be almost treeless, but in recent decades government-sponsored afforestation efforts have changed this. Among the archipelago’s ecological attractions are turtles and avians; the endangered green turtles (Chelonia mydas japonica) that lay their eggs on Wangan Island between May and October are protected by ROC law. Cat Island, despite its name, is a haven for seabirds.

June is a good time to come, as is September, but the peak months of July and August are best avoided because of the crowds and the heat. Generally speaking, winter in the archipelago isn’t much fun as chilly winds blast the landscape.