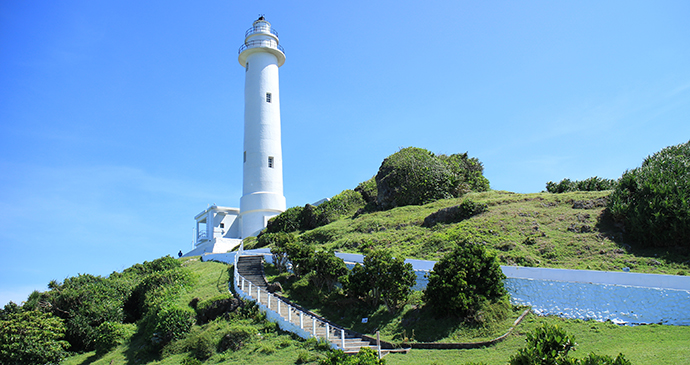 Lyudao lighthouse stands out as a beacon as you approach the coastline of Green Island © Windyboy, Shutterstock

It’s been Green Island only since 1949 – previously it was known as ‘Fire-Scorched Island’ because the inhabitants used to light fires on the hillsides to guide fishing vessels home.

No-one can dispute the aptness of the name. Created by an undersea volcanic eruption, Green Island, is dominated by rich verdure and dark mossy hues that go well with the black cliffs and grey pyroclastic boulders. And it’s all alone, 33km from Taiwan’s shores. There’s no archipelago here, just a few rocks above water at high tide to keep the island company. It’s been Green Island only since 1949 – previously it was known as ‘Fire-Scorched Island’ because the inhabitants used to light fires on the hillsides to guide fishing vessels home. Since 1803 the islanders (current population 3,500) have been Han Chinese. Austronesian people certainly lived here a few centuries back and possibly as long as 4,000 years ago, but who exactly they were, and when and why they left, isn’t known for sure. In 1951, Chiang Kai-shek’s regime decided to use the island as a place of imprisonment and exile for communist agents, subversives and political opponents. Thousands of prisoners were shipped here for interrogation and re-education; torture was routine and executions commonplace. Prisoners broke rocks on the beaches and helped build the airport. The last political convict was released in May 1990 (he’s now a respected member of parliament) and visitors can tour the buildings where prisoners were held. Ordinary criminals, among them some leading mafiosi, continued to be housed in an off-limits high-security institution that’s one of the island’s major employers.

At high tide the island’s land area is just 15km², while at low tide this expands to a little over 17km² as receding waters expose coral platforms rich in marine life. The fish, crabs and other creatures that inhabit the tidal zone make snorkelling a very popular pastime, second only to soaking in one of the world’s three saltwater hot springs. Local tour operators have made the snorkelling so safe even non-swimmers can join in and get a glimpse of what’s beneath the surface. Because the Kuroshio Current draws fish towards the island and then traps them just offshore, there’s some excellent scuba diving. Many divers prefer the winter months when underwater visibility is often 20m. For general visitors, April and May are good months as temperatures and humidity levels are lower than during the summer peak season, and the strong winds that sometimes make winter ferry crossings extremely uncomfortable are seldom a problem. If the sky isn’t hazy, from the boat you’ll get capital views of the mountains that abut Taiwan’s east coast; you may see flying fish skim the waves and perhaps a dolphin or two. Approaching the rugged coastline in gloomy weather provokes a stirring, ends-of-the-earth sensation. For convicts and dissidents this must have exacerbated their despair. For many visitors, however, it’s central to Green Island’s appeal.