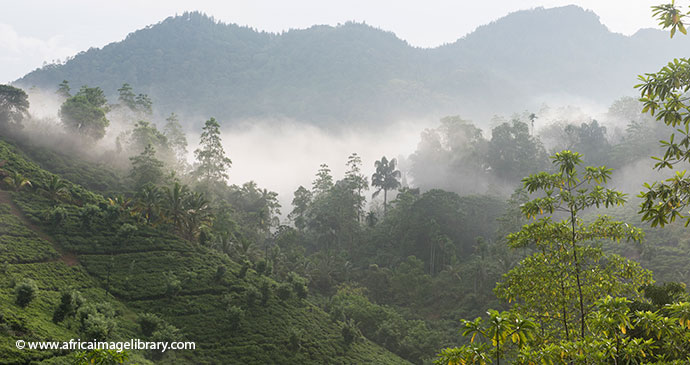 The biodiverse rainforests of Sinharaja protect 830 endemic plant and animal species, including all but two of the 33 bird species unique to the island.

Sri Lanka’s most important biodiversity hotspot and number-one birdwatching destination is the 88km2 Sinharaja Forest Reserve, which protects the largest remaining tract of rainforest in the island’s southwestern wet zone. An important watershed, it swathes a rugged mountain range that extends for 21km from east to west, but is classified as lowland rainforest owing to its relatively modest altitudes, which rise from below 100m to 1,171m at the summit of Hiti Pitigala. Sinharaja has a hot and sweaty climate typical of tropical rainforests, with temperatures ranging from 19°C to 34°C, high humidity, and an average annual precipitation in the ballpark of 4,500mm. Unlike most other parts of Sri Lanka, rain falls prodigiously throughout the year, even during the relatively dry period from January to March, when the monthly average still exceeds 200mm. In zoological terms, Sinharaja’s most remarkable feature is a quite extraordinary level of endemism, which embraces at least 830 plant and animal species unique to Sri Lanka, and more than a dozen plant genera whose range is confined to this one forest. The forest reserve is of particular interest to birdwatchers, since all but two of the 33 species endemic to Sri Lanka have been recorded here, and it is the easiest place to see many of them.