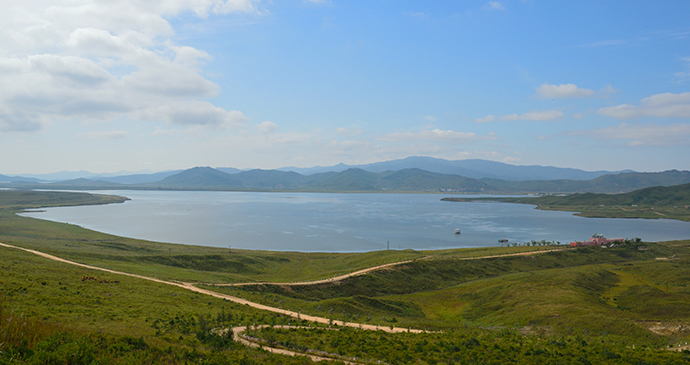 Rason is home to some of North Korea’s finest lagoons, beaches and hills © Carl Meadows

A curious and attractive corner of a bizarre nation, where North Korea borders both China and Russia and the government is slowly trialling a more open economic system.

The 746km2 Rason Special Economic Zone lies in the extreme northeast of the country, bordering China and Russia. This curious corner of an already bizarre nation came into existence in 1991 when Pyongyang, in reaction to the economic reforms that were taking place in China, decided to flirt with trials of a more open
financial system. As global communism essentially collapsed and economic chaos was unleashed from the Baltic Sea to the Bering Strait and beyond, Pyongyang’s main trading partners fell, one by one, by the wayside. The Cold War was over and old allies were embracing a new economic era: capitalism.

While many of these former communist nations went through an economic ‘hard landing’ in the 1990s, the DPRK, as with nearly all things, decided to try and usher in these much-needed changes under draconian controls. Rather than roll out nationwide reforms it was decided that a litmus test was required, something that the old guard in Pyongyang would be able to swallow – and where better to trial a more open system than in the remote northeast. With the gift of hindsight, we now know that the attempt at these reforms in the wake of communism’s global collapse was too little, too late: North Korea went through the hardest landing of all in the 1990s, decimating the country. The counties of Rajin and Sonbong (the name Rason deriving from the ‘Ra’ of Rajin and ‘Son’ of Sonbong) were part of the economic basket case that was North Hamgyong until this special zone came into existence.

On paper, Rason offered everything to seemingly keep all parties happy: a distance from Pyongyang; a rail link with Russia; an ice-free port; and a border with China’s Yanbian Korean Autonomous Prefecture. A good analogy for the aim of Rason is to compare it with how things work in China and its Special Administrative Regions of Hong Kong and Macau. Rason, like Hong Kong, has, on paper, some form of semi-autonomy with different laws, rules, regulations, customs and visa requirements from the rest of the country which all, purportedly, make it more open for business with the outside world than the rest of the country. Separated from the rest of the country, a country within a country almost (with a border fence to prove it), Rason opened for investment. Of course, little came. Foreign speculators would be taking major risks by investing here, and the majority of the ‘businessmen’ that can be found here today would be called ‘traders’ by most. Yes, some business has come; the Russians have been trickling money into developing the rail infrastructure and the aforementioned ice-free ports, while China, Mongolia and others have dipped their toes into certain other waters, but most of the business is still small scale and speculative, with many of those who have decided to try their luck in Rason having political or ethnic ties to the DPRK.

While Rason strives to become a bustling hub of business in this self-proclaimed ‘Tuman Triangle’, where China, Russia and the DPRK meet along the Tuman River, it is, in reality, a sleepy and picturesque corner of the country, with some of North Korea’s best sandy beaches, photogenic lagoons and green hills, all of which can be visited with relative ease. The atmosphere is different here, somewhat more relaxed, and the different setup for tourists makes a visit to Rason of particular interest to those who may have already been to North Korea and want to see an alternative version of how things could be. While three or so days is more than enough time for most visitors, the relaxed nature of the zone does allow for the possibility of longer leisurely trips – perhaps to soak up the summer sun or to focus on special interests, such as cycling and fishing.

While Rason may be rooted to its two namesake counties, both of which having a town of the same name, Sonbong is a lethargic underling compared with Rajin, which is the only town of real note. Accordingly, Rajin is the logical base for exploring the region, as any corner of Rason can be visited from here on a day trip. More of a town than the city it strives to be, central Rajin is quite walkable, although you will likely be obliged to drive from point to point. Being an autonomous capital of sorts, Rajin is slowly being upgraded and now has, by North Korean standards, a comparatively affluent air about it. The town develops from one year to the next as money, particularly from China, comes in. The state too now affords Rajin with more importance than it may have had in the past; the bustling Rajin Market and showcase foreign-language school highlight that Pyongyang may not be completely closed to the idea of rolling out wider economic reforms. Life here may still be hard, but on the face of it few North Koreans will have seen such an improvement in their lives over the last 30 years or so as those of Rajin have done, as it has transformed from being a remote backwater to being admired, somewhat begrudgingly, by the top-of-the-pile Pyongyangites.