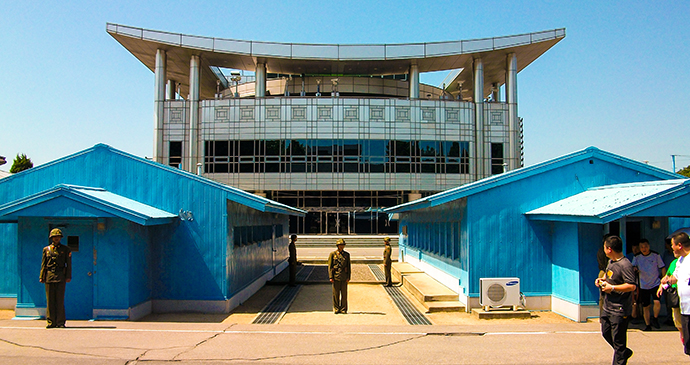 Panmunjom is the most heavily militarised border in the world © Chintung Lee, Shutterstock

This is the single-most poignant reminder of a divided nation, where troops from North and South stare at each other over the DMZ.

Nowhere so singly highlights this divided nation as Panmunjom, where, you will be told, the US forces, ‘fell to their knees before the Korean people and signed the Armistice Agreement’. Panmunjom is actually a village just north of the border, but over the years it has come to be used as a metonym for what should more accurately be called the Demilitarised Zone (DMZ) and/or the Joint Security Area, the famous photographed spot where troops from each side glare and stare at each other, standing in the extreme reaches of their respective territory, the actual border: the Military Demarcation Line (MDL).

The three-year Korean War was one year of fierce fighting followed by two years of relative stalemate; though the fighting continued, little territory changed hands. By December 1950 the US was already discussing terms for an agreement to end the war, mooting at one point a 32km-wide demilitarised zone, but it was not until 10 July 1951 that armistice discussions started. Talks were originally held in Kaesong, in the possession of the North, but were moved shortly after to near Panmunjom, with the agreement that the protection of the area was shared by both powers.

The tense, painful and protracted meetings – 565 in total, comprising 227 liaison officer meetings, 179 subdelegate meetings and 159 plenary sessions – laboured over every point for a total of two years and 17 days, in which time the death toll continued to rise. The talks themselves were often a charade, with both sides engaging in time wasting and being deliberately obtuse, acerbic and venomous, such was the absolute aversion they had for each other. At last, on 27 July 1953 the armistice was signed. The North managed to paint the armistice as a victory, as while their original goal was to ‘drive the enemy into the sea’, in 1951 they quietly changed this slogan to ‘drive the enemy to the 38th parallel’, something they more or less achieved.

With the agreement signed, the Military Armistice Commission (MAC) was established to supervise the armistice, while the Neutral Nations Supervisory Commission (NNSC) was also set up to ensure both sides adhered to the finer points of two sub-paragraphs of an agreement that was understandably complex, to put it mildly. Both commissions still exist, but the passage of time has very much changed how things operate. Originally, an area called the Joint Security Area (JSA) was formed, a roughly circular enclave, approximately 800m in diameter, bisected by the Military Demarcation Line. This was envisaged as a neutral area, with free movement of both sides within the JSA; US and United Nations Command (UNC) troops could step into North Korean sovereign territory (and vice versa), as long as they stayed within the confines of the JSA. From 1953 to 1976 the JSA, despite perpetual tension, more or less functioned as a neutral zone, up until the Panmunjom Axe Incident resulted in the freedom of movement within the MDL ceasing. Since 1976 respective sides have stayed firmly on their own side of the border, save for when they have access to the huts that perfectly straddle the border, huts that are still in use to this day by both sides when they need to try and thrash out agreements on matters such as the 2018 Winter Olympics.

Today, in this sad place where, decades on, peace seems as far away as ever, crossing the border is impossible to all bar the very rarest of VIP delegations. No matter how small that little cement threshold appears, do not even think of trying to cross – it could well be the very last thing that you do; as the apt saying goes, ‘the line between bravery and stupidity is so thin that you don’t know you’ve crossed it until you’re dead’.