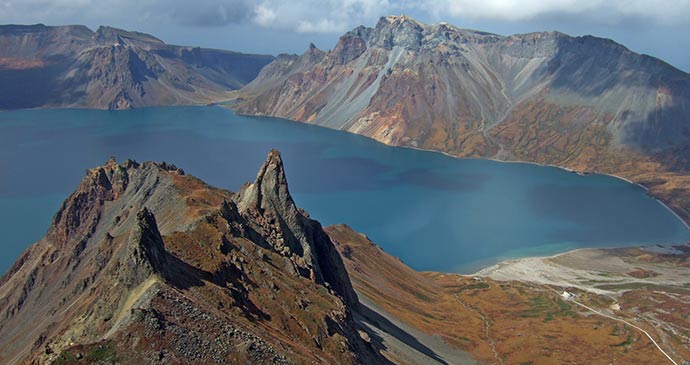 The highest point in all of Korea, this jaw-droppingly spectacular peak is steeped in revolutionary history.

The prime reason for visiting the region is to come to Mount Paektu, or Paektusan as it is known to all Koreans. The importance of Mount Paektu in the DPRK cannot be emphasised enough, and local texts perhaps summarise it best: ‘It is said that if one is to know Korea one must see Mount Paektu.’

The mountain, which rises up to 2,750m above sea level, is an active volcano and the highest peak in not just the Korean Peninsula but Manchuria also, as it sits on the border of both, with the summit, Janggun Peak, situated in and accessible only from the Korean side. The crater lake of Lake Chon, formed in AD946, lies in the caldera atop the mountain at an altitude of 2,190m. Further eruptions, the last in 1903, have occurred over the centuries and the mountain is studied by both domestic and foreign volcanologists, all trying to predict when the mountain may next blow its top. Alleged to hide in the depths of the lake, the Nessie-esque ‘Lake Tianchi Monster’ (‘Tianchi’ being the Chinese name for the lake) is believed by some to surface from time to time, but the jury is still out on that one. Still, with an area of just over 9km2 and a maximum depth of 384m, the lake is as good a place as any for a cryptid trying to keep a low profile.

Geography aside, the mountain is considered a place of Korean ancestral origin and the birthplace of the legendary founder of the Ancient Joson Dynasty, Tangun Wanggeom, the grandson of heaven and son of a bear. While proof of his existence is very questionable, Tangun’s 5,000-year-old bones and relics were discovered (yes really!) in 1993, in Pyongyang’s Kangdong District. Fast forward 5,000 years or so, and the mountain has been used as the backdrop for more legends, with Paektu so steeped in revolutionary history that it is quite possible Korean People’s Army divers will soon discover an Excalibur weapon of some kind, à la King Arthur, that Kim Il Sung carried in the vanguard of some campaign against the Japanese.

While accurate Soviet records will tell you that Kim Jong Il was born in Vyatskoye, near Khabarovsk in Russia, on 16 February 1941, all North Koreans will tell you otherwise – Kim Jong Il was born one year later on the southern slopes of Mount Paektu, in the Paektu Secret Camp. The region is littered with numerous ‘secret camps’; formerly hidden military camps deep in the forest and mountains. It was at the camp, you will be told, that Kim Il Sung was headquartered from 1936 through to 1943, and also from where Kim Il Sung and his band of merry men frequently came out of hiding to deal repeated blows in hundreds of ‘battles’ against the Japanese who, despite their superior strength, lived in great fear of Kim Il Sung. The seeds of independence were literally sown on the legendary Paektu.

Endless tomes have been published in Pyongyang on the ‘history’ of the revolutionary struggle and anti-Japanese activities during the Japanese colonial war, and while the majority of it seems totally fabricated, some is indeed true. The Korean government, with total control over all facets of media in the country, has concocted such a fantastical tale that it has become, locally, undisputable fact. The region is therefore not just an area of outstanding natural beauty; it is the birthplace of the Korean people, of North Korea and of its former Dear Leader, Kim Jong Il. Mount Paektu is renowned locally as the sacred mountain of the Korean Revolution, and as such has become the Mecca of the DPRK.