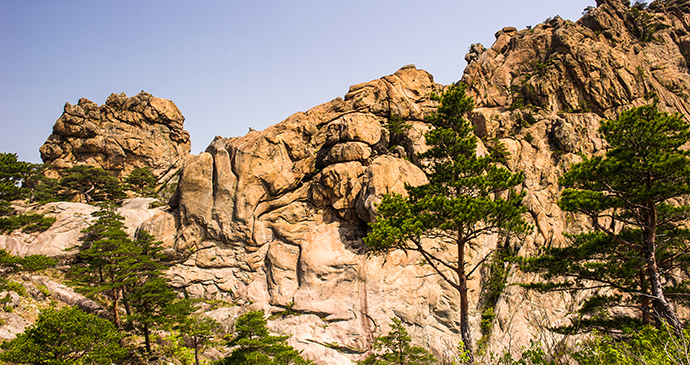 This beautiful corner of Asia is known for its craggy peaks © Anton Ivanov, Shutterstock

Revered by all Koreans, Mount Kumgang (meaning ‘Diamond Mountain’) has been a site of near-mythical status since at least the 7th century.

Running along the eastern edge of the Korean Peninsula, the Taebaek Mountains stretch for 500km from Wonsan in the North all the way to the port city of Busan in the South. While South Korea may lay claim to having the greatest infrastructure for those heading in to the hills (thanks to the 2018 Winter Olympics taking place in Pyeongchang in the South) and boast the highest peak in the range with Seoraksan’s Daechongbong (1,708m), the North can argue that they have the most pristine and best-preserved stretch of mountains on their soil in Mount Kumgang.

Revered by all Koreans, Mount Kumgang (meaning ‘Diamond Mountain’) has been a site of near-mythical status since at least the 7th century, with many writers, poets, artists and clergymen making pilgrimages to this beautiful corner of Asia. Like some other regions in Korea the mountain has four names, one for each season (‘Kumgang’ in spring, ‘Pongnae’ in summer, ‘Phungak’ in autumn and ‘Kaegol’ in winter), but over time Kumgang has become the most used. According to local cartographers, Kumgang has over 100 principal peaks, and a grand total of 12,000 lesser peaks; while few may have verified this subsequently, after a walk in Manmulsang, or almost anywhere in the region, most will hopefully accept this figure as just a slight exaggeration and dispel any need for thoughts of independent verification.

The mountain is loosely divided into three regions, from the attractive lakes and coastline of the Sea Kumgang to the stunning scenery of Kuryong and Manmulsang in Outer Kumgang, before it rises all the way up to the 1,639m Piro Peak (not to be confused with the other Piro Peak in North Pyongan) in Inner Kumgang. Covering an area of 530km2, the region was previously a part of Kangwon Province until becoming the Kumgangsan Tourist Region in 2002, a result of the deal made between Hyundai Asan (a branch of Hyundai, the South Korean conglomerate) and the North. Somewhat confusingly, the region is still occasionally included as part of Kangwon Province (as it is in this book), now that Hyundai Asan has no control in the region.