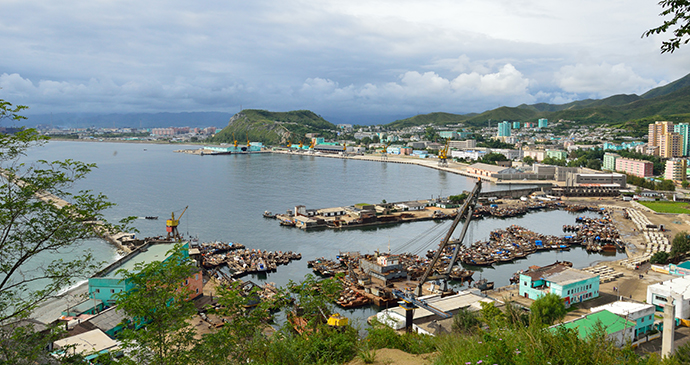 The country’s unofficial northern capital, this industrial ‘City of Iron’ is a world away from – and a good decade behind – busy Pyongyang.

A small fishing village before the arrival of the Japanese, Chongjin transformed itself over the course of the 20th century to become a major industrial city and port. This ‘City of Iron’, as locals often call it, also proudly promotes itself – in somewhat unique socialist-romantic tones – as being a ‘Grand Ferrous Metallurgical Base’, with massive complexes such as the Kim Chaek Iron and Steel Complex and the Puryong Alloy Steel Complex making great chunks of this city of 668,000 look like a Lowry artwork.

The economic collapse of the 1990s devastated Chongjin. At first the factories struggled and people became malnourished, but as time went by many plants shut up shop completely. Those who were young, or savvy enough, managed to adapt – just – by engaging in pursuits such as private enterprise and smuggling, or by simply foraging for food in the hills. However, many of Chongjin’s residents, who had only ever known a system where the state provided all and only knew to do as they were told, ultimately starved. The city seemed to have been forgotten by the state and by Pyongyang, and left to fend for itself. The worst was over by the turn of the century, but Chongjin looked in parts like a dystopic wasteland – a forest of scrap metal and sea of cracked concrete, with smoke and dust heavy in the air.

Over the last ten years or so, however, Chongjin has slowly begun the long process of picking itself up, dusting itself off and getting back to work as the country’s unofficial northern capital. Factories are slowly coming back online, more traffic – including the previously semi-dilapidated trams – can be seen on the streets and, perhaps most tellingly, the people that call this struggling city home seem happier and more optimistic – like a great weight has been lifted from their shoulders. As the province looks to the possibility of doing serious business with Russia and China (Vladivostok and the massive Chinese city of Changchun are both closer than Pyongyang is), prospects in Chongjin can surely only improve as time goes by. But for now, it feels that every tourist dollar spent will likely do more good here than anywhere else in the country.