Despite the fact that the capital moved to Beijing in 1264, the Orkhon Valley has dominated the country as a centre of nomadic culture

The Orkhon Valley was listed by UNESCO in 2004 (www.unesco.org) as one of its World Heritage Sites in Mongolia, along with the Great Lakes Area in Uvs Aimag (in 2003) and the Petroglyphs of the Altai (in 2011). One reason this beautiful river valley in Arkhangai Aimag was selected is that it clearly demonstrates how a strong nomadic culture led to the early growth and development of ancient trading routes and archaeological remains dating back to the 6th century. The control of this valley was of strategic importance. 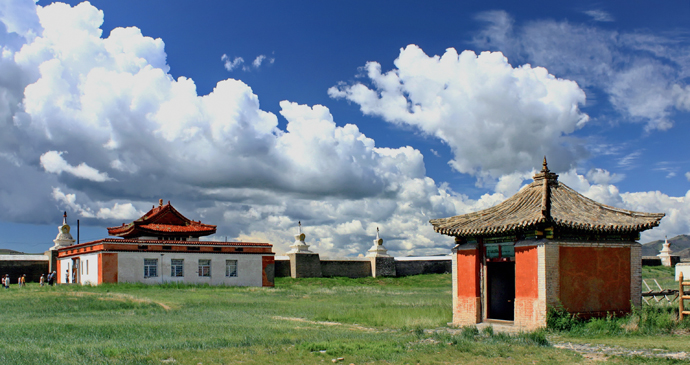 Erdene Zuu Monastery is Mongolia’s oldest Buddhist monastery, founded in 1586 by Abtai Khan, and was one of the few monasteries to survive, partly intact, the destruction of religious establishments in the 1930s © Hons084, Wikipedia

The valley is principally known as the site of the Mongol khans’ capital Karakorum in the 13th–14th centuries. Despite the fact that the capital moved to Beijing in 1264, the Orkhon Valley has dominated the country as a centre of nomadic culture – illustrating even today how nomads respect nature and live in harmony with it. The valley is an outstanding example of various significant stages of development in human history, from trading posts to capital. The World Heritage Site includes a core zone on both banks of the River Orkhon and a buffer zone of over 14,000ha.