This wildlife-rich park is the largest of Mongolia’s national parks and the second-largest protected area in Mongolia.

Gobi Gurvansaikhan National Park covers over two million hectares and lies within a few kilometres of Dalanzadgad. It extends 380km from east to west and some 80km north to south. The park is the largest of Mongolia’s national parks and the second-largest protected area in Mongolia. It comprises gravel and rubble plains, salt wetlands, dry valleys, springs and oases. Surprisingly, despite the barren landscape and hostile climate, the Gobi Gurvansaikhan provides a home to a wealth of wildlife.

Fifty-two mammal species have been recorded in the park including wild ass, pikas, hamsters, gerbils, jerboas, Gobi bear, wolf, snow leopard, wildcat, argali, ibex and gazelles. There have also been 246 kinds of birds recorded: the majority are resident breeding birds. Look out for kestrels, lammergeier, vultures, saker falcon and altai snowcock. Part of the park is a strictly protected area, although it welcomes visitors in non-restricted areas and ecotourism is one of its strengths. 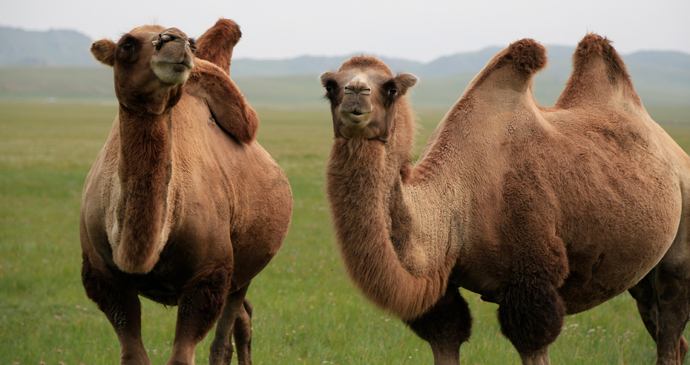 The nomads and small settlements of Gobi Gurvansaikhan National Park depend on animals such as bactrian camels for their livelihood © Barbara Barbour, Shutterstock

In the mountains you might find snow leopard trails although it is virtually impossible to spot them. Their haunts are known and it’s easy to see their droppings. Keep a look out for ibex and argali (wild sheep) on mountain climbs. Views to the distant horizons from the summits are stunning. The foothills of the mountains consist of red cretaceous sandstone which has eroded into gorges. The shortage of water limits the living conditions for people and animals. Drinking water comes from wells and domestic animals are watered in the Gobi by means of hand-drawn water, bucketed into wooden troughs.

One thousand families (around 5,000 people) live within the national park, either as nomads or in small settlements. Their livelihood depends on their camel and goat herds, totalling over 250,000 animals. A number of herders supplement their income by undertaking park activities such as monitoring, research, or collecting park entrance fees.

The peak tourist season tends to be between mid-June and September when the climate is more favourable – a slightly longer season than other parts of Mongolia. The park welcomes between 3,000 and 5,000 foreign visitors each year, the majority from east Asia, Australia and western Europe and most arriving through Mongolian tour operators. There remains a lack of tourist infrastructure.