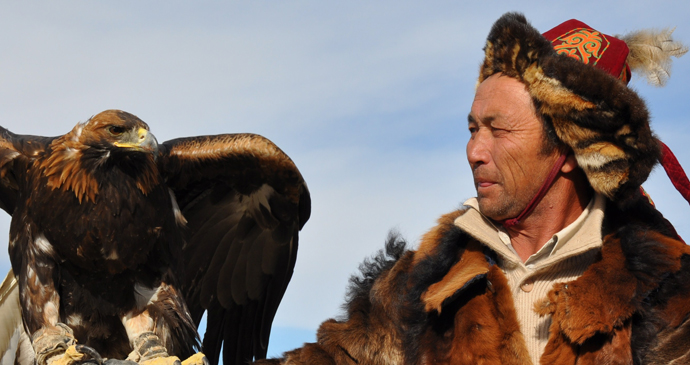 The Mongolian Kazakh eagle hunters, known as berkutchi, hunt on horseback and use only female golden eagles © Altaihunters, Wikipedia

The aimag (province) of Bayan-Ölgii is in the far northwest of Mongolia with about 1.5 million head of livestock and a human population of roughly 100,000, mainly Kazakhs. They speak their own language and their culture is quite unlike the rest of Mongolia. Whereas most Mongolians are Buddhists the Mongolian Kazakhs are mostly Muslim, and they love to hunt with their eagles.

The Kazakh word for eagle is berkut and a hunter who trains and hunts with a berkut is known as a berkutchi. They use golden eagles that live and breed in their mountains, and they only use the female of the species, as she is larger than the male. This size difference is typical of all diurnal birds of prey, the larger female berkut is used mainly for hunting foxes; the hunting season is in winter, usually between early October and early February.

Hunting is done on horseback as is virtually everything in Mongolia; the berkut is carried on the right arm as opposed to Western falconers who carry their hawks on their left. The greater weight of the female berkut is supported by a forked support fitted to the saddle called a baldark. She is hooded with a specially made hood called a tomega to keep her calm. It is removed when scanning vast areas of steppe from a high vantage point to take advantage of those wonderful ‘eagle eyes’.

Whereas most Mongolians are Buddhists the Mongolian Kazakhs are mostly Muslim, and they love to hunt with their eagles. This province is the ideal place to see them in action.

An eagle can spot movement, even the slightest twitch, from a great distance – sometimes a mile or more. An experienced berkutchi can read his berkut’s body language and will release her to fly, sometimes from just the feel of her tightening grip on his gloved arm, indicating she has spotted prey. When the berkut is in pursuit the Kazakhs show their mastery of horsemanship, and often the high-speed descent of the mountain and subsequent race across the steppe is an exhilarating experience.

The Kazakh tradition of using the berkut to hunt foxes, and at one time wolves, goes back centuries. The skill and knowledge has been passed down through the generations: father, son and grandson. It is not unusual to see boys of ten years old and younger handling their father’s berkut, who can be nearly as big as they are. To experience some time living with a berkutchi family and going out on a horseback hunt with a trained berkut is best done through a guide/interpreter.

Winter in Mongolia can be cold, and winter in the highest aimag can be even colder, so it is wise to pick the month to visit with some thought. October is the first month that hunting with the berkut really starts, and for most of the month the temperature is not seriously low. October is also when the Altai Eagle Festival is held in Ölgii, a celebration of the Kazakh tradition and their love of the golden eagle. Generally held over two days and attended by up to 70–80 berkutchi dressed in their finery, they compete for the best livery of themselves, their horse and their berkut.

On the second day they compete on the steppe in a number of flying tests to find the overall winner. If successful hunting is your goal, then a visit in November holds more promise. The temperature has dropped, the berkuts are fitter after the lazy days of summer, and if you are lucky there is a dusting of snow. During December, January and February the temperature is getting serious with midday temperatures sometimes not getting above –20°C.