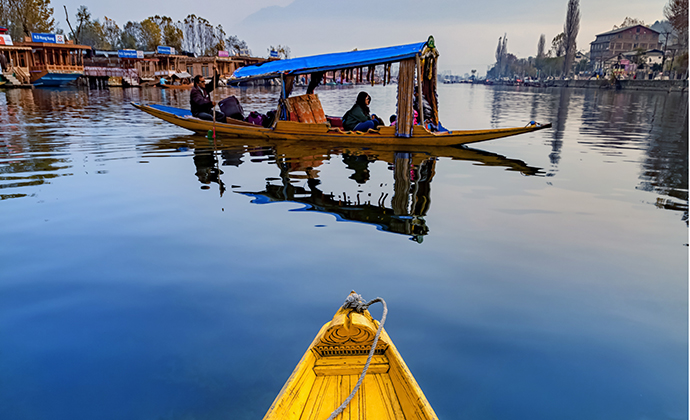 Relax for hours in one of India’s floating palaces on Dal Lake © ImagesofIndia, Shutterstock

Breathtakingly beautiful as it rises from the mist that hovers in the early morning across the surface of the water in the lakes, the summer capital of J&K is a city rich in history, where the past is worn lightly on the sleeve.

If J&K is the crown of India, then Srinagar is the jewel in that crown. Breathtakingly beautiful as it rises from the mist that hovers in the early morning across the surface of the water in the lakes, the summer capital of J&K is a city rich in history, where the past is worn lightly on the sleeve. Artistic traditions, from carpet making to woodcarving, are still practised in backstreet workshops; architectural masterpieces displaying an array of influences dot the skyline; and the houseboats, where British memsahibs played games of bridge, hippies smoked and The Beatles strummed away the hours under the watchful eye of Ravi Shankar, still float timelessly on the water.

Srinagar is not trapped in the past, however: it is a city moving forward apace. A short tourist boom between 2012 and 2016 meant much new development had started to take place to cope with the expected rush of tourists. The last few years had seen the opening of a cable car to transport visitors to the Makhdoom Sahib Shrine, and the hill atop which the Hari Parbat fort is perched had been turned into an eco-reserve, a haven for local wildlife in an otherwise busy city. However, mid-2016 onwards saw a return to the old ways, with an increase in protests, violence and tit-for-tat killings causing tourism to plummet once again.

A note on security

At the time that the guide went to print in late 2019, the security situation in the Kashmir Valley had become extremely tense thanks to increased militant violence, protests and rioting – not to mention a very strained stand-off with Pakistan. and the decision by the Indian government to revoke Article 370 (see the health and safety page for more information). As we’re yet unsure how this will play out, we strongly advise that you check with your country’s state department on the current situation before travelling to any part of the Kashmir Valley.