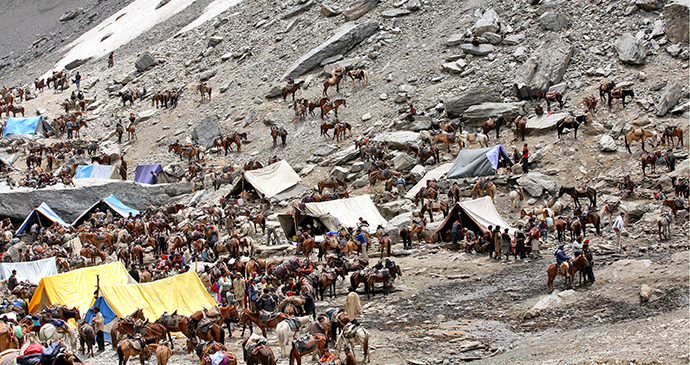 Join Hindu pilgrims making the annual journey to the Amarnath Cave, one of their religion’s most sacred shrines © Vladimir Melnik, Shutterstock

According to the Hindu texts, the Himalayas are the home of Lord Shiva, and it was inside the Amarnath Cave that he recounted the story of creation to his wife, the goddess Parvati.

The Amarnath yatra, or pilgrimage, is the principal draw for domestic tourists coming to this part of J&K: Baltal, not far from Sonamarg, is a popular starting point for the two-day trek (15km each way) through the mountains to the holy Amarnath Cave. The other possible departure point is Pahalgam, which is a longer three-day route (36 48km depending on exactly where you start and end).

According to the Hindu texts, the Himalayas are the home of Lord Shiva, and it was inside the Amarnath Cave that he recounted the story of creation to his wife, the goddess Parvati. Inside the cave is a large ice lingam – a phallic structure that is associated with Shiva – as well as two smaller lingams that are said to represent Parvati and Ganesh, the elephant-headed son of Shiva and Parvati. Without a doubt, this is one of the holiest shrines of Hinduism, and it is possible that the cave has been a place of worship since as early as 300BC.

Pilgrimage to Amarnath is only possible from late June until mid-August due to the inclement weather in the mountains. Even so, the route is frequently closed for several days during this period for safety reasons, and people do die each year on the way. All would-be yatris (pilgrims) must register with the Shri Amarnathji Shrine Board prior to starting their pilgrimage. Non-Hindus are welcome to complete the pilgrimage route too, but still have to register and provide a medical certificate confirming they are in good health. Huts and tents are erected along the route to provide shelter, and ponies and porters can be hired to carry your baggage. You must trek with a group, not alone, and due to the physical challenges, children under 13, adults over 75 and women who are more than six weeks pregnant are not permitted to participate.

Finally, even though the scenery is often spectacular, keep in mind that the huge majority of people are here for religious rather than scenic reasons and they can come in huge numbers. At especially auspicious times, there can be thousands of people on the trail and the trek becomes less of a walk and more of a queue. If you want to commune quietly with nature, then go elsewhere.