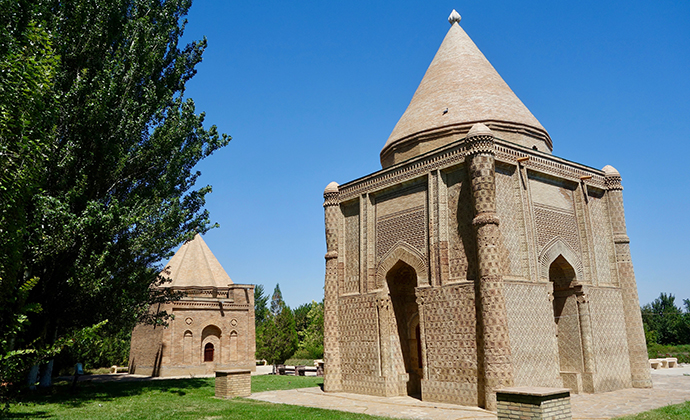 Marvel at the exquisite terracotta tiling in the Mausoleum of Aisha Bibi.

The beautiful Karakhanid Mausoleum of Aisha Bibi is one place you should definitely see as part of any visit to Zhambyl Region. It sits in the village of the same name, west of Taraz. To get here, take the main road out of Taraz towards Shymkent (or hire a taxi for approximately T2,000 one-way). Aisha Bibi village lies 8km beyond the western gateway to the city. Within the village, take the signposted left turn to the mausoleum, turning left again (also signposted) where the road forks. The mausoleum is about 500m from the main road. It sits in a fenced compound amid grounds filled with red rose bushes, making this a delightful spot in season.

The Mausoleum of Aisha Bibi, the larger of the two Karakhanid buildings in the compound, is a heavily, but finely, restored square-based building, originally dating from the 11th or 12th century, with a conical roof. The external decoration is stunning: every spare piece of wall is covered with carved terracotta in a wide range of geometric designs. It is the only monument in central Asia fully covered with carved terracotta tilework. The main entrance is on the eastern side of the building, set in a niche. Niches on the other three walls enclose latticed wooden windows. There is a cloth-covered tomb inside.

Aisha Bibi is the subject of a popular legend in Kazakhstan. While there are numerous variations of the story, it runs broadly as follows. Aisha, of a well-todo 11th-century family and a descendant of the Prophet, was brought up by her stepfather, Zangi-Ata. The Governor of Taraz, Shakhmakhmud, fell in love with her, and asked for her hand in marriage. This was rejected by Zangi-Ata, since Shakhmakhmud did not have Aisha’s distinguished lineage. Aisha defied her stepfather and rode for Taraz to be united with the man she loved, but just short of the city she was bitten by a snake and died. The distraught Shakhmakhmud, who is also known as Karakhan Bab, built this beautiful mausoleum at her place of death. Shakhmakhmud never married, and became a wise and benevolent ruler, receiving the informal title of ‘holy father’, Aulie Ata. Since the monument is associated with the eternal qualities of love, and because it is a beautiful place surrounded by red roses, it is a popular spot for wedding couples to come and be photographed.

To the right stands another attractive building, the Mausoleum of Babazhi Khatun. This is a 12th-century structure that has also been heavily restored. It has a distinctive ‘corrugated’ conical dome, with 16 sharp-edged ridges radiating out from the top, looking rather like a hat made in a school origami class. The external walls are plainer than those of the Aisha Bibi Mausoleum, though an Arabic inscription runs across the top of the eastern facade, above the arched entrance. There is no tomb inside the building. Babazhi Khatun is popularly believed to be the friend or nanny of Aisha Bibi, who faithfully tended the latter’s mausoleum after her death, and was buried nearby.