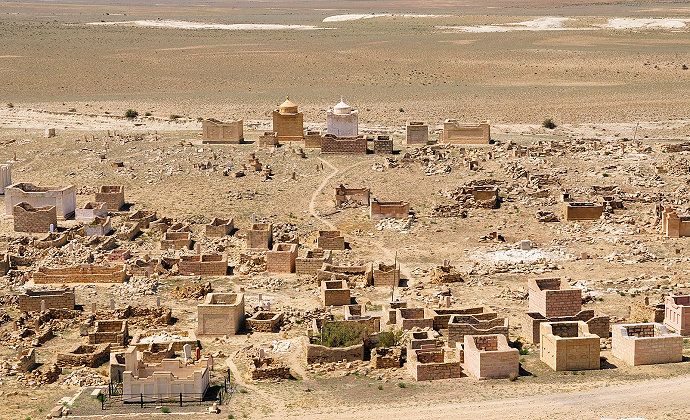 A number of underground mosques hewn out of solid rock dot the desert-like Mangistau region.

The desert scenery of the Mangistau hinterland is stunning, with white limestone escarpments and isolated mountains rising up from the plains. Aktau becomes a cheerful beach resort in summer, with plans under way to turn Kendirli in the south of the region into a major resort destination. Fort Shevchenko, Mangistau’s oldest town, was the place of exile of Ukrainian poet Taras Shevchenko. And the necropolises and underground mosques that dot Mangistau Region are among the most arresting of all Kazakhstan’s historical monuments.

Shakpak Ata is the most architecturally impressive of the underground mosques of Mangistau Region: it is a fascinating site that deserves to be much better known. Continuing eastwards on the road running between Fort Shevchenko and Taushik, beyond the turning to Sultan Epe, you reach after a further 7km a crossroads, where a rougher track crosses the road. The track to the left is signposted to Shakpak Ata. Take this. After 3km, the striking dry-floored Kapamsai canyon comes into view to the right of the road. This is a limestone canyon with dramatic overhanging walls. The track takes you down a steep descent towards the coast to the side of this canyon. At the base of this descent, another 3km on, turn right where the track forks. After a further 5km is a modern domed building. This place, built in honour of a local figure named Erzhan Haziret, celebrated for his spirituality, provides basic overnight accommodation (sleeping on the floor) for pilgrims visiting the Shakpak Ata site. There is a one-roomed museum within the building, containing items of clothing worn by Erzhan Haziret as well as, usefully, floor plans of Shakpak Ata and other underground mosques in the region.

Turn right immediately beyond this building, on to a track that runs into the broad canyon in which lies the necropolis of Shakpak Ata, a few hundred metres away. On the side of the canyon, to your left, is the underground Mosque of Shakpak Ata, dated according to the plaque here to sometime between the 10th and 13th centuries. The rock forming the side of the canyon has taken a honeycomb form here, a result of wind erosion. Into the rock are cut several rectangular niches, places of burial. Firestones, shiraktases, stand in front of these. There is a niched arched portal, covered with etchings of horses, handprints and inscriptions in Arabic. You enter the mosque through a wooden door close to the portal, then climb a few rough steps.

The plan of the mosque, strikingly, takes the form of a cross. The square central space rises to a domed ceiling with a hole in the top for light and ventilation. At each corner of the space is a column, with graceful, flat arches running between them. At the centre of this space was another shiraktas when I visited, though this resulted in comments from other visitors that no pilgrim would make such a fire in a mosque – its rightful place was at a graveside – and the suggestion that the shiraktas may have been placed there by a film company, for effect. The chamber to the south has a niched mihrab, with further niches around it. The chamber to the east of the central space is much longer than the others, with further niches along its walls, possibly for books. The walls of the mosque are further enlivened by small holes into which lamps would have been placed, by numerous Arabic inscriptions, and by etched drawings of horses, goats and handprints.

At the end of the longer eastern chamber is a second entrance to the mosque, a flight of steps that brings you up on to the plateau on the side of the canyon. A modern, square-based building with a metal roof has been placed above the roof over the central chamber: while a conservation measure, the structure detracts from the natural beauty of the site. Near this building, cut into the limestone plateau, are two lines of nine egg-shaped indentations: this was a board for the game togyzkumalak.

Beyond the necropolis, the white walls of the canyon, and tamarisk bushes in the valley floor, make for some enticing scenery. You may see flints here: shakpak, in Kazakh, means ‘flint’.