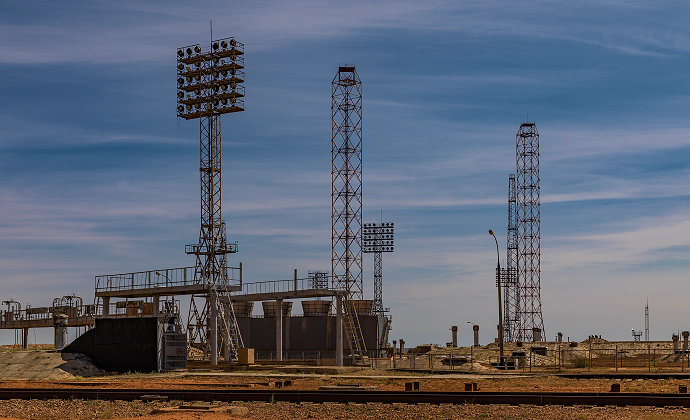 Discover Baikonur Cosmodrome, the launchpad for the Soviet space programme, the world’s first and largest.

The cosmodrome is located north of Baikonur town, on the other side of the Orenburg–Tashkent railway line and the main east–west road. The checkpoint marking the entrance into the cosmodrome is about 8km north of the town. The facilities are widely scattered across the open steppe; your guided tour will include only a few of the more historically interesting sites. The overall distribution of facilities across the territory of the cosmodrome tended to reflect the work of the competing design bureaux involved in moving the Soviet missile and space programmes forward. The central area of the cosmodrome was based around the processing and launch facilities of the designer Sergei Korolev. The western side, or left flank, served the ballistic missiles and space launchers developed by the design bureau of Vladimir Chelomei, including the facilities for the Proton rocket. The eastern side, or right flank, was devoted to facilities supporting Mikhail Yangel’s bureau.

All the facilities on the cosmodrome are allocated a number, and a logical enough place to start a visit is the launch pad bearing the title of Site No 1. This place provided the purpose of the original facility: it was the launch pad for the R-7 ICBM, first launched from here in 1957. This was also the pad used for the Vostok rockets, and Site No 1 is now informally known as the ‘Gagarin Pad’, because it was from here in 1961 that Yuri Gagarin was launched into space and into history. It is still in use today, as the launch pad for the manned Soyuz programme.

Museum of the Baikonur Cosmodrome

In the nearby Site No 2, housed in one of the first buildings constructed here, is the Museum of the Baikonur Cosmodrome. You are welcomed in past a bust of Gagarin. A room of artworks includes paintings of Gagarin and Korolev constructed with grains of rice, and portraits made with salt, the latter gifts from the salt-rich town of Aralsk. A large exhibition hall beyond features photoboards showcasing the work of the various manufacturers and other organisations active in Baikonur town and cosmodrome. There is also a model of the cosmodrome, showing the location of the launch pads for different rocket types, each illustrated by a small model of the rocket concerned.

Outside the museum are displayed various items of equipment, with pride of place going to a Buran space shuttle. You can climb the steps into its fuselage, though the interior has been somewhat sanitised, with photo displays about the Buran programme on the walls. A model of a Helios satellite is in place, ready to be lifted up to the cosmos. In the nose there are aeroplane-style seats for seven passengers. You can climb up a metal ladder into the cockpit and imagine yourself a cosmonaut.

Some 3km from the museum, Site No 254 at the cosmodrome is home to a huge, four-storey, blue and white-painted hangar, which from the outside looks like an ordinary office block when viewed from one angle, but displays its large hangar doors from another. The building is 312m x 254m in size, and was built for the Buran space shuttle programme. Since Buran’s demise it now serves as the assembly and test block (known by its Russian acronym, MIK) for the Soyuz and Progress programmes. The clean and spacious hangar where the rockets are put together is an impressive sight. Cradles allow for vertical testing of individual parts of the assemblage, but the rocket leaves the hangar for the launch pad in a horizontal position, by rail. Messages are barked out in rapid-fire Russian from a tannoy. There is a large silhouette of Korolev on the wall of the hangar, accompanied by the slogan ‘the road to the stars is open’.

The Proton rocket, a product of Vladimir Chelomei’s design bureau, is a long-serving unmanned launch vehicle. First launched in 1965, the Proton remains in use, although it is slated for replacement by the Angara rocket, which can carry a heavier payload and uses a less toxic fuel mix. Baikonur is the only location used for the launch of Proton rockets, which are built at the Khrunichev plant in Moscow. Its name derives from the Proton scientific satellites that were among the rocket’s first payloads.