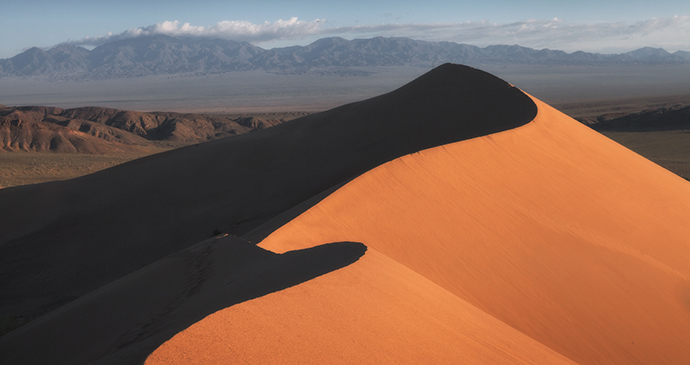 Altyn Emel National Park is one of the best places in Kazakhstan to see herds of wild hoofed mammals: the park boasts a population of some 6,000 goitered gazelle.

Established in its present form in 1996, and covering an area of some 460,000ha, the Altyn Emel National Park is one of the largest in Kazakhstan. Its southern boundary is formed by the Ile River and by Lake Kapchagai. The northern boundary of the park is marked by a line of hills, a western spur of the Dzhungar Alatau range, whose name changes from west to east: Degeres, then Altyn Emel, then Koyandytau. It is said that the name ‘Altyn Emel’, which means ‘golden saddle’, was given to the hills by Genghis Khan when he passed this way in 1219 and saw them covered with sun-yellowed grass. In the east of the park are two further ranges, Katutau and Aktau. The rest of the park comprises dry plain.

This is one of the best places in Kazakhstan to see herds of wild hoofed mammals. The park boasts a population of some 6,000 goitered gazelle, known as jieran. In the 1970s, a small population of central Asian wild ass, or kulan, was brought here from the Barsakelmes Nature Reserve, in response to the ecological problems associated with the desiccation of the Aral Sea, which turned Barsakelmes from an island into a peninsula and greatly raised the salinity of the Aral. The wild ass have thrived in Altyn Emel, and now have a population of some 2,000. Much harder to spot are the park’s arkhar, some 400 in number, which prefer remote upland environments. The park authorities’ latest projects are the introduction to Altyn Emel of the Przhevalsky horse, using horses brought from Munich Zoo, and the Bukhara deer. The mammals are at their most active, and easiest to spot, early in the morning and late in the afternoon.

The Altyn Emel National Park also boasts some striking archaeological and natural sights, of which the two most important are the Iron Age burial mounds of Besshatyr, and the large barchan, or more accurately barchans, known as the Singing Sand Dune.

While some national parks in Kazakhstan have taken a cautious approach to tourism, seeing their role as to protect the natural environments from people rather than to attract visitors in, Altyn Emel sees tourism development as one of its central activities. In terms of tourist routes, the park is effectively divided into two separate parts (approximately 260km2) by a specially protected reserve, or zapovednik, in the central section, through which tourists are not usually allowed to pass. The small rural village Basshi, housing the park headquarters and accommodation, is the gateway to the sights of the eastern section of the park, including the Singing Sand Dune, and Aktau and Katutau hills. It is also here that all visitors overnight. The western section of the park, containing the Besshatyr burial mounds and Terekty petroglyphs, is best approached direct from Almaty, and you will need to make your payment in advance through the park’s Almaty office or a travel agent.