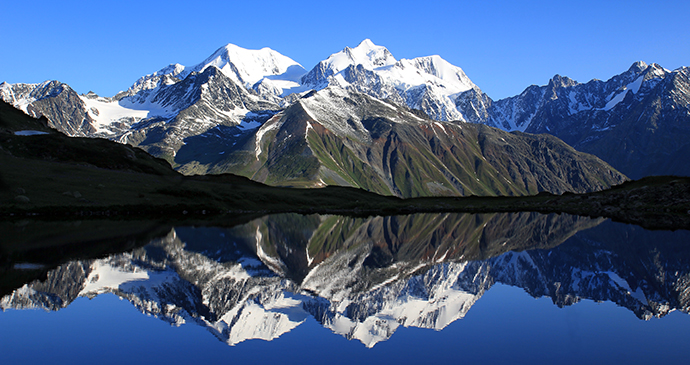 Straddling Kazakhstan, Russia, Mongolia and China, the Altai Mountains are thought by some to be the legendary Buddhist kingdom of Shambala.

The Altai Mountains straddle four countries: Russia, Kazakhstan, Mongolia and China. The segment falling within Kazakhstan, in the far northeast of the country, gives the country some of its most delightful landscapes. Deciduous forests at low altitude, with birch and aspen, rise to mountain taiga, with cedar, pine, silver fir, larch and birch all prominent. Above around 1,800m the forest gives way to mountain meadows, and then to tundra. The highest point, the twin-headed peak of Mount Belukha on the border between Russia and Kazakhstan, reaches 4,506m. Images taken from the space show the mountain as flower-shaped amid the surrounding peaks. The forests, which experience high rainfall, are rich in mushrooms and berries. Mammals found here include bear, maral deer, red wolf, elk and sable. There are many charming villages in the area, of log-walled cottages with corrugated metal roofs. Logs for winter heating are piled high outside.

There is a strong spiritual dimension to the Altai Mountains. Old Believers, who separated from the hierarchy of the Russian Orthodox Church in the mid 17th century in protest at the reforms of Patriarch Nikon, found refuge in the remote valleys of the Altai. The graves in local Muslim cemeteries are distinctive: with fiveor six-sided wooden pyramidal frames, a little picket fence around the base of the pyramid and a crescent moon at the apex. The size and striking form of Mount Belukha, whose peaks are often shrouded in cloud, have attracted many faiths. Shamans consider the mountain to hold particular significance: its double-headed peak suggests a certain femininity of form that made the mountain for them the female counterpart to Khan Tengri, the home of the male god of the heavens. The spiritual teacher Nicholas Roerich, who spent time in the area with his family during his four-year Asian Expedition in the 1920s, was gripped by the place. Perhaps here might be found the legendary Buddhist kingdom of Shambala, always believed to have been hidden somewhere in central Asia, beyond the peaks of the Himalayas. Followers of Roerich’s Agni Yoga make pilgrimages to Mount Belukha.

The pop group Three Dog Night once sang about the virtues of the rain of Shambala in washing away troubles and pain, and certainly the Altai Mountains in Kazakhstan receive plenty of rain. One positive result of this is the abundance of mushrooms and berries to be found in the forests. After rains the locals take to the woods with plastic buckets. Another object of local harvest is the antlers of young maral deer. The antlers are a source of pantocrine, believed by adherents to enhance strength and sexual potency, and by some even to ward off the ageing process. The industry, which originated in the area in the 18th century with the Old Believers, involves organised stag farms. The antlers are removed from the young deer and boiled, forming a pantocrine-enriched broth. Several stag farms and sanatoria in the area offer visitors the opportunity of a rejuvenating bath in pantocrinerich waters. If bathing in antler-infused water is your bag, some Oskemen travel agencies can help set this up. The season for pantocrine treatments is a short one running roughly from the beginning of June to mid-July.