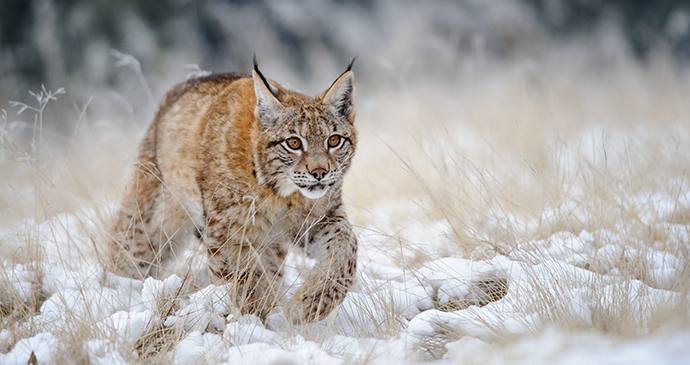 Explore the Aksu Zhabagly Nature Reserve, home to the white-clawed Tian Shan bear, the Siberian ibex and an astounding number of tulips.

Established in 1926, the Aksu Zhabagly Nature Reserve is the oldest in central Asia. It protects part of the Talasky Alatau range of the western Tian Shan Mountains. The territory of the reserve ranges in height from 1,100m to Peak Sayram at more than 4,200m, the latter resting at the boundary between the Aksu Zhabagly Nature Reserve and Sayram-Ugam National Park. Peak Sayram is a popular place for mountain climbers; Russian singer-songwriter Vladimir Vysotsky is among those who have made it to the summit. The reserve offers a range of environments from steppe to upland meadows, juniper forest and snow-capped mountaintops fringed by large glaciers.

The reserve gets its name from the two main rivers flowing through its territory. The Aksu River means ‘white water’, the colour derived from its passage through the limestone mountains. The Zhabagly River is named from the Kazakh word meaning ‘one-year-old horse’. A legend surrounding this name tells of how the first settler of this picturesque valley, arriving here with his family, was forced to leave to join his tribesfolk in a war. In his absence, the family members he had left in the valley were kidnapped by bandits, his livestock slaughtered and his yurt razed to the ground. When our hero returned from the war he found only scorched ground where his yurt had stood. In total despair, the horse he had left as a foal suddenly ran towards him, having miraculously survived both the bandits and the subsequent winter. Our hero saw the horse’s appearance as a sign that he should not give up, and persevered with the establishment of a settlement on the banks of the river he named in his horse’s honour. And the horse tasted good, too. (OK, I revised the ending slightly.)

The reserve is home to many rare species of plants and animals. In late April and early May, the focus of all those who come to the reserve is the bright-red Greig’s tulip: one sight, known as Red Hill because of the colour the tulips turn it in spring, boasts densities in places of more than 60 wild tulips per square metre. Kaufmann’s tulip is another important species of the western Tian Shan, often found at rather higher elevations. The local tourism authorities bill these mountains as the possible birthplace of the wild tulip. Among the mammal species found in the reserve, the snow leopard is one that visiting tourists are unlikely to encounter. Numbers in the reserve are low; it is confined to remote spots and hunts mainly at night. The reserve also provides a home to the white-clawed Tian Shan bear, a relative of the brown bear, the Siberian ibex and Eurasian lynx. The Menzbier’s marmot, smallest of all the marmots, is endemic to the western Tian Shan. It has dark, almost black, fur on the upper parts of its body; pale yellow underneath. One further mammal rumoured by some locals to live in the remote mountains of the reserve is a yeti, a wild snowman. An expedition in the Soviet period even tried to find him.

The largest of the birds found in the reserve is the lammergeyer. You may also see the golden eagle, often found circling above the Aksu Canyon, the Himalayan griffon vulture and the Eurasian eagle owl. Another rare species found here is the blue whistling thrush: hearing its whistle is considered good luck.