The Tutong District is largely rural with hillier rainforest and lake reserves inland, with some longhouse territory bringing together people from the Dusun, Iban, Kedayan and Tutong tribes. 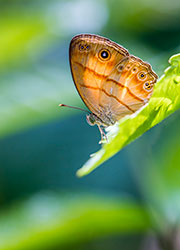 Barely 40km from the capital, the town of Tutong (also known as Kuala Tutong) lies among coconut palms near the Tutong River. (Kuala, by the way, means ‘river mouth’ and has nothing to do with Australian marsupials.) There are several kampung named Kuala along Brunei’s estuary-specked coast. The Tamu Tutong Kampung Serambagun is a daily open-air market held 1km from the town centre, selling lots of local fruits, vegetables and handicrafts. Many vendors come from the rural hinterland to buy and sell their produce.

Pantai Seri Kenangan – ‘the unforgettable beach’ – is a popular recreation spot (fishing, swimming, picnics) five minutes’ drive from Kuala Tutong Town. Located on a narrow spit of land between the South China Sea and the Tutong River, it has beach chalets, picnic pavilions, restaurant and food stalls. From here, you can also take a trip on the Sungai Tutong.