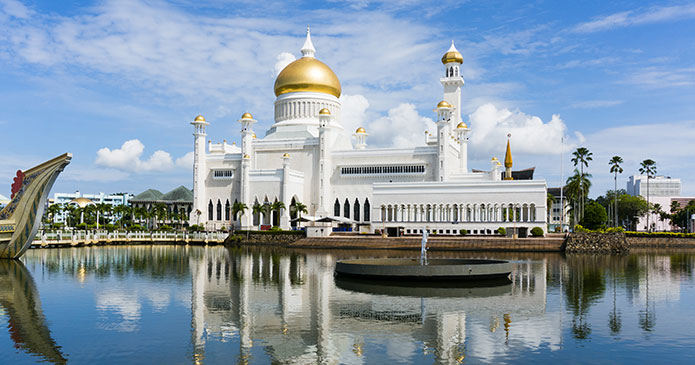 Built in 1984 at a cost of US$400 million, the Istana Nurul Iman – the Sultan’s home – has 1,788 rooms and stretches over 0.5km along the riverbank, making it the largest residential palace in the world. The Istana (meaning ‘palace’) opens once a year to the public at the end of Ramadan, during the Hari Raya Aidilfi tri celebrations. Thousands of Bruneians and foreigners queue for hours at its gates to get a peek inside. The open-house times are published in local newspapers, including the Borneo Bulletin (English-language) and Media Permata (Malay). At other times, the best exterior view of the palace and its 300-acre grounds is from a boat on the Sungai Brunei. On a night cruise, you will see it lit up like a true fairy-tale palace, thanks to some 55,000 light bulbs (the electricity is apparently very cheap, powered by gas turbines). Failing that, you can gaze at it from the public car park on Jalan Tutong, or from the adjacent park Persiaran Damuan. This 1km-long riverbank jogging haven has paved walkways and a series of sculptures by artists from the original six members of the Association of Southeast Asian Nations. The ‘ASEAN-6’ includes Indonesia, Malaysia, the Philippines, Thailand, Singapore and Brunei Darussalam.