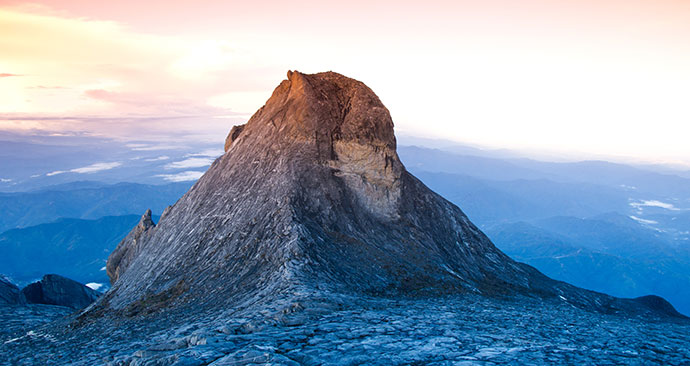 The coolest place in Borneo, it is a botanical and ornithological paradise, with over 300 bird species, 5,000 flowering plants and a multitude of mosses, ferns and fungi.

Mount Kinabalu was sacred to local indigenous communities long before Gunung Kinabalu National Park gained World Heritage UNESCO status in 2000. For the Kadazandusun the mountain is the resting place of their ancestral souls, so indigenous climbers have always made an offering to avoid being cursed. Lower zones of Gunung Kinabalu National Park are scarred by forestry, mining and slash-and-burn agriculture. The UNESCO listing did not come too soon – and some would argue, not soon enough.

Spread over 754km², an area larger than Singapore, the park encompasses several distinct mountain environments and climate zones. The coolest place in Borneo, it is a botanical and ornithological paradise, with over 300 bird species, 5,000 flowering plants and a multitude of mosses, ferns and fungi. The floral inventory includes 26 rhododendrons, nine pitcher plants, over 80 fig tree species and more than 60 species of oak and chestnut tree. The 1,200 orchid species range in size from being as small as a pinhead to having 2m-long stems.

Ascending from 600m to 4,095m above sea level, Gunung Kinabalu passes through 12 climate zones. Such variety bears a wealth of biodiversity, and flora and fauna adapted to the altering conditions, from conifers and lowland rainforest to alpine meadows. The massif comprises 16 granite peaks of various heights, culminating in the 4,095m summit. It was baptised Low’s Peak, after Sir Hugh Low, who led the first official expedition to the summit on 7 March 1851, when he was colonial secretary of Labuan.

At Panar Laban hut – 6km up the 8.5km trail – Low and his local guides performed the ritual sacrifice of a chicken to appease the ancestral spirits and seek safe passage. Two expeditions to explore the mountain’s flora and fauna led by Professor John Corner on behalf of the Royal Society of London in 1961 and 1964 were also important steps to the creation of the national park in 1964. According to the UNESCO World Heritage Centre, a World War II prisoner of war also played an instrumental role. One of six survivors of the Sandakan to Ranau death march, he formed the Kinabalu Memorial Committee hoping to ‘preserve the Kinabalu area for the decency of man and a facility for the enjoyment of all of Sabah’.

The pride of Sabah, the park gets about 400,000 visitors a year. Most do not climb to Gunung Kinabalu’s summit, preferring to soak up the sublime surroundings on the mountain’s lower slopes. Many hopes are being pinned on tourism as a sustainable job creator, reducing the reliance on agriculture. In June 2015, a 5.9 magnitude earthquake hit Mount Kinabalu, killing at least 16 people including a group of schoolchildren climbers from Singapore. The natural disaster shook locals deeply. Officials blamed the quake on a group of foreign tourists, who allegedly desecrated the mountains’ spirits by posing naked on the summit a few weeks earlier, and then posted their insensitivity on Facebook for all the world to see.