Zanzibar Town is divided in two by the wide thoroughfare that is officially called Benjamin Mkapa Road but is more commonly referred to by its older name: Creek Road (in reference to a creek that was long ago reclaimed). On the west side of Creek Road is the ‘heart’ of Zanzibar Town: the evocative old quarter, usually called Stone Town. This is the more interesting section for visitors: many of the buildings were constructed during the 19th century (although some date from before this time), when Zanzibar was a major trading centre and at the height of its power.

The trade created wealth which in turn led to the construction of palaces, mosques and many fine houses. Discovering the architectural gems hidden along the tortuous maze of narrow streets and alleyways that wind through Stone Town is part of the island’s magic for many visitors. Aside from the souvenir Tingatinga paintings, neatly folded kanga fabrics and beaded jewellery, it’s a scene virtually unchanged since the mid 19th century.

What to see and do in Stone Town

One writer has compared the old Stone Town of Zanzibar to a tropical forest where tall houses stretch to the sky instead of trees, and the sun filters through a network of overhanging balconies instead of foliage.

Its labyrinth of twisting streets and alleys is a stroller’s paradise, with new sights, sounds or smells to catch the imagination at every turn: massive carved doors, ancient walls, tiny tempting shops with colourful wares and bustling shoppers, old men hunched over a traditional game, kids with homemade toys, ghetto-blasters at full volume, little boys hawking cashews or postcards or fresh bread, the sound of the muezzin calling from the mosque and the scent of cloves or ginger or lemongrass – and everywhere the echoes of Zanzibar’s rich and fascinating history, the sultans, shipbuilders, explorers, slave markets, merchants and exotic spice trade.

The market is about halfway along Creek Road and a good place to visit even if you don’t want to buy anything. At the end of the 19th century, the town’s marketplace was inside the Old Fort. Today’s market hall was built in 1904, and some very early photographs of the market displayed in the museum show that very little has changed since then. The long market hall is surrounded by traders selling from stalls, or with their wares simply spread out on the ground.

It’s a very vibrant place where everything, from fish and bread to sewing machines and secondhand car spares, is bought and sold. Don’t miss the swathes of multi-patterned cotton fabrics, the fragrant spices and mound after mound of exotic fruit and vegetables, though – and just enjoy people-watching and being part of a Zanzibar experience which hasn’t yet become especially touristy.

On the northeast side of the town, in the Kinazini waterfront quarter, this old building was constructed in around 1860 for Sultan Majid, at a time when Zanzibar was used as a starting point by many of the European missionaries and pioneers who explored eastern and central Africa during the second half of the 19th century. David Livingstone, probably the most famous explorer of them all, stayed in this house before sailing to the mainland to begin his last expedition in 1866. After independence and the Revolution the house became the Zanzibar headquarters of the Tanzania Friendship Tourist Bureau, the forerunner of the Zanzibar Tourist Commission.

A large downstairs room is due to open as a Livingstone Museum at an unspecified point in the future, under the curatorship of Said El-Gheithy, the local academic and guide who is also the curator of the Princess Salme Museum. When open, it will offer displays of original artefacts and reproductions of items associated with Livingstone’s life, as well as story boards recounting his travels.

Housed in a large white building with castellated battlements situated on Mizingani Road, where the latter runs very close to the sea, this palace was built in the late 1890s for members of the sultan’s family and was originally called the Sultan’s Palace. From 1911, the palace was used as the Sultan of Zanzibar’s official residence, but was renamed the People’s Palace after the 1964 Revolution, when Sultan Jamshid was overthrown. It continued to be used as government offices until 1994 when the palace was turned into a museum dedicated to the history of the sultans of Zanzibar. Remarkably, much of their furniture and many other possessions survived the revolutionary years and can now be seen by the public.

The upper floors are largely devoted to exhibits from the later, more affluent period of 1870–96, with thrones, banqueting tables (the banquet room is said to be still used on occasions) and ceremonial furniture, plus personal items such as beds (look out for the intricately carved ebony love seat and the Indian sofa with Krishna on its back) and the sultan’s mobile water closet with its unusual arrangements.

The Old Fort is a huge building, containing large open courtyards, and with high, dark walls topped by castellated battlements. It was built between 1698 and 1701 by the Busaidi group of Omani Arabs, who had gained control of Zanzibar in 1698, following almost two centuries of Portuguese occupation. Today, the fort has been renovated, and is open to visitors.

It is easy to walk around the top of the battlements and enter the towers on the western side, which house ‘Colours of Zanzibar’ in the southwest tower and the ‘Collective Art Gallery’ in the northwest tower, from where local art can be purchased. In 1994, the eastern courtyard was turned into an open-air theatre. The development was imaginative yet sympathetic to the overall design and feel of the original building: seating is in an amphitheatre, and the fort’s outer walls and the neighbouring House of Wonders form a natural backdrop. It’s used for contemporary and traditional music, drama and dance, including most performances in the annual Sauti za Busara and the Zanzibar International Film Festival.

The entrance area also houses a tourist information desk, with details on performances in the amphitheatre and other events around town, plus a selection of books for sale and a range of tour company leaflets to browse. There are also several spice and craft shops, a pleasant café and public toilets. With so many attractions and facilities, it’s easy to spend an hour or so here.

The Forodhani Gardens are between the Old Fort and the sea, overlooked by the House of Wonders. The gardens were first laid out in 1936 to commemorate the Silver Jubilee of Sultan Khalifa (sultan from 1911 to 1960), and were known as Jubilee Gardens until the 1964 Revolution.

In 2009, after years of neglect, the gardens were re-landscaped by the Aga Khan Trust for Culture and are now the pulsing heart of Stone Town every evening when the food stalls come into their own. Everyone agrees the new gardens are a vast improvement, with the street lighting, waste collection, a new sea wall of salvaged stone, and an organised food court for the evening stallholders. Cafés, the bandstand, a dhow-shaped adventure playground and tropical planting amid manicured lawns make it look like the central park it is. We hope this project will prove a catalyst for ongoing urban upgrading and economic opportunity in Stone Town, as well as improving the rest of the waterfront’s aesthetic appeal.

The best way to explore Stone Town is on foot, but the maze of lanes and alleys can be very disorientating. To help you get your bearings, it is useful to think of Stone Town as a triangle, bounded on two sides by sea, and along the third by Creek Road. If you get lost, it is always possible to aim in one direction until you reach the outer edge of the town where you should find a landmark. 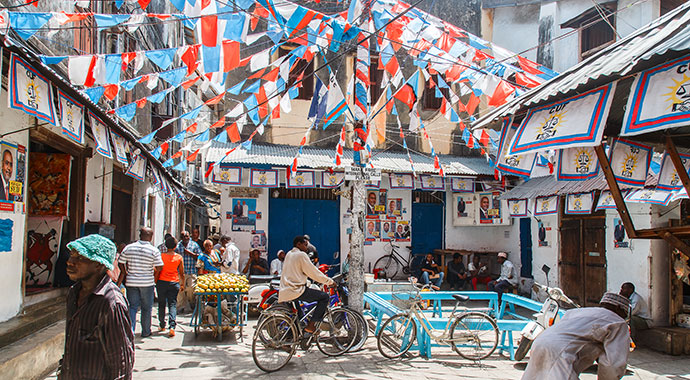 Although many of the thoroughfares in Stone Town are too narrow for cars, when walking you should watch out for bikes and scooters being ridden at breakneck speed! It’s also useful to realise that paths wide enough for cars are usually called roads while narrower ones are generally referred to as streets. Hence, you can drive along New Mkunazini Road or Kenyatta Road, but to visit a place on Kiponda Street or Mkunazini Street you have to walk.

When looking for hotels or places of interest, you should also note that most areas of Stone Town are named after the main street in that area: the area being referred to as Kiponda Street or Malindi Street, instead of simply Kiponda or Malindi. This can be confusing, as you may not be on the street of that name. But don’t worry: at least you’re near!