Sooner or later every visitor to Zanzibar will be offered a ‘spice tour’ – a trip to the farmlands just outside Stone Town to see aromatic plants and herbs growing wild or cultivated in kitchen gardens. Even if you decline a tour, the array of spices on offer in the souvenir shops or heaped in baskets in the local markets will tell you that spice is central to Zanzibar’s history and economy.

The history of spices in Zanzibar begins early in the 16th century, when the ‘spice race’ between the major European powers to control the lucrative trading routes to the Far East was at its height. Portuguese traders gained a toehold on Zanzibar as part of their plan to rule the coast of East Africa and imported various plants, including spices, from their colonies in South America and India. Some land was cleared for plantations, but the Portuguese never really developed their presence on Zanzibar beyond a military one.

It was left to the Omani Arabs, who ruled Zanzibar from the early 19th century, to develop Zanzibar economically as a spice-producing entity. Sultan Seyyid Said, the first Omani sultan to govern Zanzibar, quickly realised the potential of his new dominion, with its hot climate and regular rainfall, as a location for spice farming. With the demise of the slave trade in the late 19th century, spices became Zanzibar’s main source of income.

When the era of the sultans ended and the long arm of the British Empire reached Zanzibar, the island’s new colonial administrators encouraged the farming of spices and other useful plants, bringing European scientists to establish experimental agricultural stations and government farms such as those at Kizimbani and Kindichi. Today these areas still contain spice plantations controlled by the modern Tanzanian government. 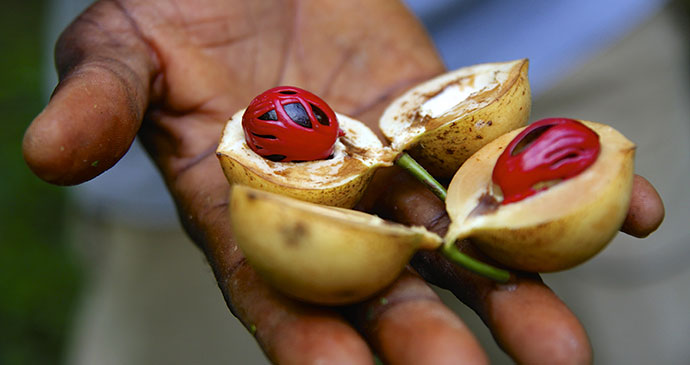 But spices in Zanzibar today are by no means simply the preserve of governments keen to produce cash-rich export products or a useful tourist attraction. For the ordinary people of Zanzibar, spices and useful plants are a vital part of everyday life and a rich element in the island’s strong and vibrant culture. The spices grown in village kitchen-gardens give their flavour to the distinctive cuisine of Zanzibar, provide innumerable cures for everyday ailments, and yield the dyes and cosmetic products needed to celebrate weddings and festivals.

A spice tour is probably the best way of seeing the countryside around Stone Town and meeting rural communities. Guides take you on a walking tour of the villages and plantations at Kizimbani or Kindichi, picking bunches of leaves, fruit and twigs from bushes and inviting you to smell or taste them to guess what they are. Pretty much all the ingredients of the average kitchen spice rack are represented – cinnamon, turmeric, ginger, garlic, chillies, black pepper, nutmeg and vanilla among many others. Local children follow you all the way round, making baskets of palm leaves and filling them with flowers to give to you. At lunchtime, you’ll stop in a local house for a meal of pilau rice and curry, followed by sweet Arabic coffee and perhaps a slice of lemongrass cake. Many spice tours include a visit to the Persian baths built by Sultan Said for his harem, and stop at Fuji or Mangapwani beaches just outside Stone Town for a swim on the way back.

All in all, even if horticulture isn’t one of your interests, a spice tour is still an excellent way of gaining an insight into one of the most important aspects of rural life in Zanzibar.