Lying approximately 2.5km off the northeast coast of Zanzibar, Mnemba is a picture-perfect 11ha coral island enclosed by calm turquoise waters that hide some of East Africa’s best coral reefs in a relatively unspoilt aquatic wonderland. Now privately leased by &Beyond, the previously uninhabited island operates as one of Africa’s most-exclusive and sumptuous beach retreats, and as such cannot be visited without an overnight booking. Fortunately, however, there are no restrictions on diving and snorkelling sites on the fringing reefs, where several spectacular submarine sites are visited on popular daily excursions out of Nungwi, Matemwe, and elsewhere in northern Zanzibar. 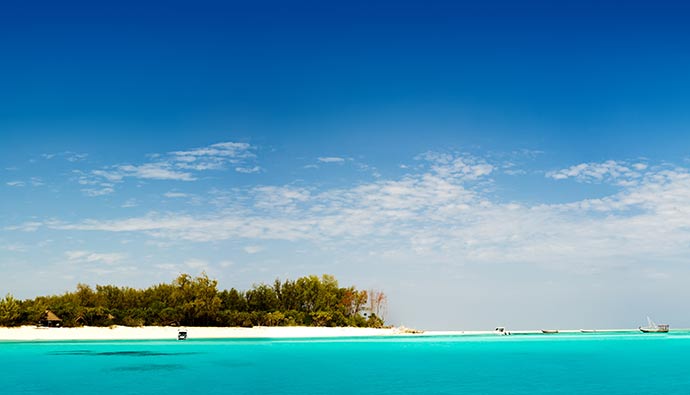 For most visitors, Mnemba’s astonishingly diverse marine fauna is of more interest than its terrestrial wildlife. The island is part of a coral formation that supports a staggering variety of marine creatures: not only hundreds of different species of colourful reef fish, but also a wealth of pelagic visitors, ranging from marine turtles and dolphins to whale sharks and manta rays. The reefs were once threatened by overfishing and a general disregard for the fragility of the environment, but sustained lobbying by &Beyond and the government resulted in the official creation of the Mnemba Island Marine Conservation Area in 2002. This was later expanded to become the Mnemba-Chwaka Bay Marine Conservation Area, which protects the entire barrier reef fringing the northeast coast as far south as Chwaka, and Mnemba’s future now seems reasonably secure.

A small conservation levy is charged on all watersports, notably snorkelling and diving, within the protected zone. This revenue is paid into a community conservation fund, the primary purpose of which is to show local fishermen and their communities the very real economic value in protecting rather than exploiting these exceptional reefs. In addition, the lodge and Africa Foundation (&Beyond’s social development partner) have invested at least US$180,000 in community projects on Zanzibar close to Mnemba: building classrooms, a windmill and ablution blocks, refurbishing the doctor’s house, supporting the orphanage, and assisting villagers with access to clean water.

Overnight guests at Mnemba Island Lodge are chauffeur-driven from the airport or Stone Town to Muyuni Beach, north of Matemwe, from where it’s a 15–20-minute ski-boat ride to the island.

Diving and snorkelling excursions to the reefs off Mnemba can be arranged through any dive school listed for Nungwi, Kendwa, Matemwe, and elsewhere in northern Zanzibar. Many people also visit as a day outing from Stone Town; any tour operator or hotel there can put you in touch with a reputable operation.