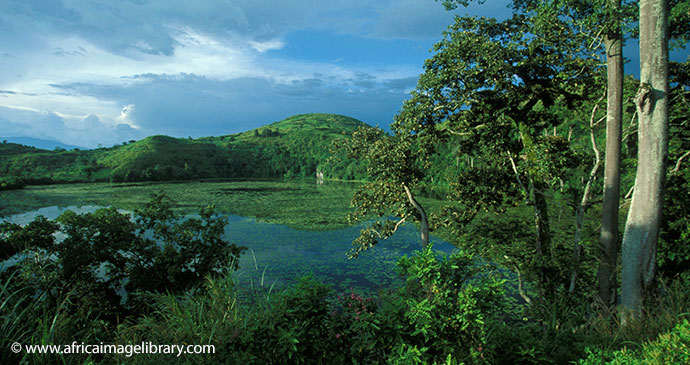 Jewel-like Lake Kifuruka is just one of the 30-plus crater lakes that stud the Rwenzori footslopes near Fort Portal © Ariadne Van Zandbergen, Africa Image Library

Thrust your hands into equatorial snow on Mount Rwenzori, the highest and most remarkable of the Nile’s many sources.

Gazetted in 1991, the 996km² Rwenzori Mountains National Park protects the upper slopes and glacial peaks of the immense 5,109m-high mountain range that runs along the Congolese border for a full 120km south of Lake Albert and north of Lake Edward. Rwenzori is Uganda’s most alluring hiking destination, traversed by two discrete six- to nine-day trail circuits, one starting at Kilembe in the south and the other at Nyakalengija about 20km further north. These trails pass through a fascinating succession of altitudinally defined vegetation zones, ranging from montane rainforest to Afro-alpine moorland, and the scenery can be breathtaking. Be warned, however, that the upper Rwenzori is widely regarded to present tougher hiking conditions than the ascents of mounts Kilimanjaro or Kenya, largely due to the mud, which can be knee-deep in places after rain, and as such it requires above-average fitness and stamina. Unlike on Kilimanjaro, normal Rwenzori hikes stick below the snowline (around 4,500m), which reduces the risk of altitude-related illness, but the glacial peaks are accessible to experienced technical climbers. At the other end of the commitment scale, those with limited time, money or stamina can choose from a number of day or short overnight hikes through the forested slopes above Kilembe or Nyakalengija, or head up to Fort Portal and follow the Northern Rwenzori mini-hike between nearby Kazingo and Bundibugyo.

Roughly 120km long and 65km wide, the range incorporates six main massifs, the tallest being Mount Stanley, whose loftiest peaks are Margherita (5,109m) and Alexandra (5,083m). Margherita is exceeded in altitude elsewhere in Africa only by the free-standing volcanic cones of Kilimanjaro and Kenya, meaning that the Rwenzori is the highest proper mountain range anywhere on the continent. There are four other glacial peaks – Speke (4,890m), Emin (4,791m), Gessi (4,715m) and Luigi di Savoia (4,627m) – but global climate change has caused the combined extent of glacial coverage to retreat from 7.5km² in 1906 to a mere 1.5km² today.

As is the case with other comparably lofty East African mountains, the vegetation of the Rwenzori can be divided into several altitude zones, each with its own distinct microclimate, flora and fauna. The Afro-montane forest zone, which starts at 1,800m, has the most varied fauna. Above 2,500m, closed canopy forest starts to give way to dense bamboo stands. Higher still, spanning altitudes of 3,000m to 4,500m, the open vegetation of the heather and alpine zones has an otherworldly quality, with forests of giant heather trees throughout, and the striking 10m-high Lobelia wollastonii and giant groundsel (Senecio admiralis) most common above 3,800m. The diverse fauna of the Rwenzori includes 70 mammal and 177 bird species, several of the latter being Albertine Rift Endemics. It is the only national park in Uganda where the Angola colobus has been recorded, though identification of this localised monkey will require careful examination as the similar and more widespread black-and-white colobus also occurs on the mountain. The only other mammal you’re likely to see in the forest is the blue monkey, but elephant, buffalo, golden cat, servaline genet, chimpanzee, yellow-backed duiker and giant forest hog are all present. At night, the forest resounds with the distinctive and eerie call of the southern tree hyrax. Mammals are scarce above the forest zone.